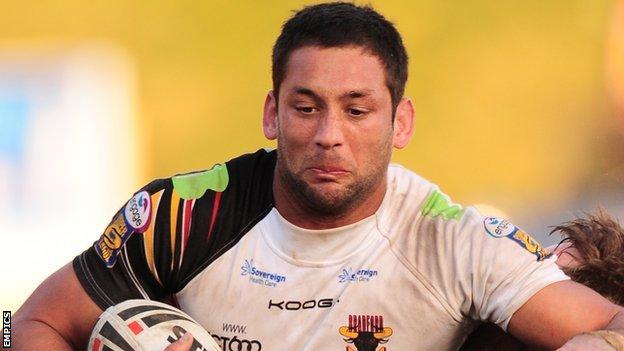 Elliott Whitehead, Keith Lulia and Shaun Ainscough scored as the hosts led 18-6, Paul Aiton going over at the other end.

Lulia and Kyle Amor exchanged tries to tie the game at 26-26, but Elima's score 13 minutes from time proved crucial for Bradford.

It was a morale-boosing victory for the Bulls who face the prospect of entering administration on Tuesday.

They went ahead as early as the second minute through Whitehead, playing despite his father Terry passing away during the week.

Heath L'Estrange and John Bateman combined for Lulia to score as the hosts led 12-0 inside the first 10 minutes.

Aiton reduced the arrears but Jamie Langley picked up a loose ball and fed Michael Platt for Ainscough to score on the overlap to regain Bradford's 12-point lead.

The game was then turned on its head as Wakefield scored three tries in 12 minutes through Cockayne, Smith and Mariano, and the visitors led 20-18 at half-time.

Seven minutes after the break Lulia's second try put the Bulls in front again, but Amor's score soon drew the sides level at 26-all.

Gale's grubber kick set up Elima for the all-important final try of the game while Gale, who kicked the resulting conversation, scored a penalty with seven minutes remaining to secure an eight-point win for Bradford.

He was then sin-binned with six minutes to go to give Wakefield a lifeline but Bradford hung on.

"We're getting a few results and there's nothing we can do about the [financial] situation. All we can do is keep getting on with what we are paid to do, which is doing our best out on the field.

"I'm more than happy that we got two points today, although there's still a lot to work on. Our players definitely tried their hardest but our execution in play was a mixed bag.

"We strive for the best possible result from each play and, although it's not always possible, you don't stop trying."

"I'm pretty annoyed with our guys. We had a soft and dishonest start to the game and, when we decided to work a bit harder, we fought our way back and were playing some good football at that point.

"Whether we were under the guise that the wind would do it all for us in the second half, I don't know, but our kicking game let us down.