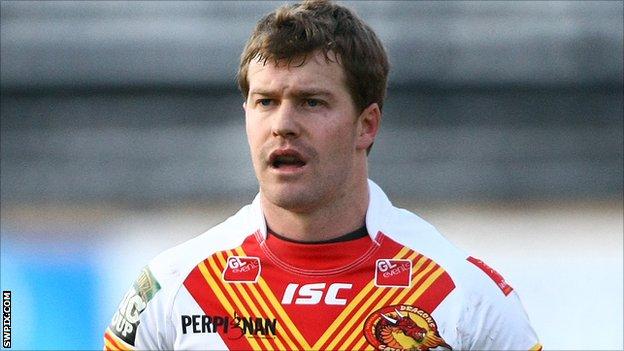 Tries from Setaimata Sa and Clint Greenshields, added to Dureau's five points with the boot, were enough to end the Dragons' two-game losing run.

Defeat was hard on Rovers, who were ahead with five minutes remaining.

Jake Webster and Scott Murrell got their tries, while Michael Dobson was on target with one goal.

Craig Sandercock's Rovers, unbeaten in four games, were looking to add Trent Robinson's side to the recent scalps of Warrington and Huddersfield.

They were also boosted by the return of stand-off Blake Green to partner the in-form Michael Dobson - a former Catalans player - at half-back.

Catalans arrived in Hull with a 100% record against their opponents and a reputation for try scoring - 93 from this season's 17 games.

But the conditions were to hamper both sides' attacking intent on a rain-soaked evening.

Neither side had found first gear when an innocuous fall from Rovers centre Kris Welham within the first five minutes led to a lengthy delay for treatment.

The Engalnd centre was taken to hospital with a suspected broken leg as both sides tried to keep warm in the damp conditions and, when play resumed, the visitors made the breakthrough.

Green spilled Dureau's chip kick inside the Rovers 10 metre and, as Greenshields offloaded, Sa had a short run in to score.

Rovers responded when Webster tracked Green's chip-kick to perfection and touched down in the corner, Dobson swinging the ball between the posts to put his side ahead.

The Robins were starting to turn the screw towards the end of an error-strewn first period but were unable to cross the whitewash.

In the second period, the Robins had two tries chalked off - Graham Horne's for a knock-on, before Craig Hall suffered the same fate.

Dureau made amends for an earlier missed conversion when he took the two points from a penalty, and Webster was first to a ball to stop Catalans from going ahead.

It looked to be a crucial touch when Murrell got his hands to a delicate grubber from Lincoln Withers to put the East Yorkshire side ahead again.

However there was further drama to come when Gregory Mounis sent through a carbon copy of Withers' kick and Greenshields touched down, although there was a hint of knock-on about the finish.

With the sides level, an audacious drop goal from Dureau inside the 40-metre mark, followed by his easily converted penalty seconds from the end were enough to sneak victory - and keep the Catalans third.

"It looks like poor Kris Welham has fractured his fibula, which would be the season, and Rhys Lovegrove has ruptured his knee ligament, which is probably an eight to 10-week injury.

"I don't think there is an X-Factor between them and us. I felt we dominated that game and I'm proud of the players for the performance we put in.

"We had an eight-three penalty count against us in the second half, and a lot of those crucial decisions unfortunately didn't go our way."

"We won a tight game, it was awful weather and I believe it has been like that for a while. We left France where it was 30 degrees and sunshine so as you'd expect.

"We don't train often in the wet conditions. But we were disappointed with the way we handled the ball.

"We haven't defended like that for a long time and hopefully that will provide us with the spark we have lacked in recent weeks. There was plenty of energy and we scrambled well with good intent."