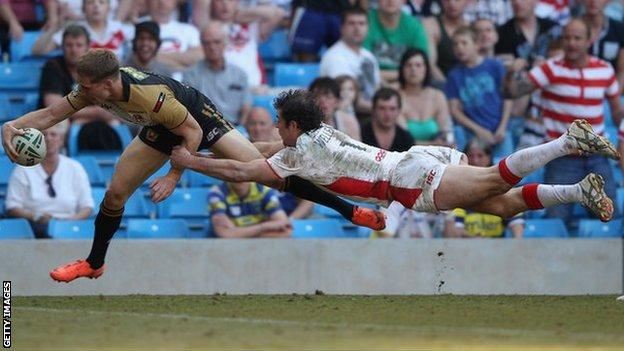 Wigan's victory over St Helens was marred by a 26-man brawl, after which three players were sent off.

Warriors' Gareth Hock and Chris Tuson, plus Saints' Shaun Magennis, all saw red cards for their part in the melee.

Until tempers flared, Wigan, who are now back on top of Super League, had been by far the dominant outfit.

The two teams had drawn 16-16 at Magic Weekend last season, but this turned out to be a one-sided affair, at least while both sides had their full compliment of 13 men on the field.

The foundations for a third Wigan victory over St Helens in 2012 were laid with five tries in a blistering first 25 minutes.

Brett Finch, man of the match when the Warriors won their Challenge Cup quarter-final against Saints earlier this month, jinked his way through to set up Tomkins for the opening score of the game.

Wigan went further clear when Hock showed some nifty footwork to sidestep Saints captain Wellens before touching down under the posts. And it got worse for Mike Rush's side when Charnley finished off a neat team move.

Wigan were purring at this stage and their confidence was encapsulated by Tomkins, who produced an outrageous piece of handling to deceive the opposition defence and sprint 60 yards before touching down in the corner for the try of the weekend.

Another skilful Warriors set ended with skipper O'Loughlin going over, before Saints finally got on the scoreboard, Clough receiving a pass from Jonny Lomax to score from close in.

But Charnley's second try of the evening, his 20th in Super League this season, knocked the stuffing out of Saints on the stroke of half time.

Wigan's dominance continued in the second period as Carmont matched Tomkins' earlier feat, running from inside his own half to stretch the lead even further.

Then came the game's flashpoint. Hock and Louie McCarthy-Scarsbrook clashed in the scrum and a fight involving all 26 players ensued.

Numerous punches were thrown by players from both sides and, after a two-minute delay while the melee was calmed and the officials discussed what action to take, Hock, Tuson and Magennis were dismissed by referee Ben Thaler.

McCarthy-Scarsbrook scored the next try as Saints tried to make their extra man advantage count, but Wigan extended their lead with a Charnley penalty and a converted try from Liam Farrell.

There was still time for Wellens to notch his 200th try for St Helens and that proved to be the end of the scoring, but the ramifications of this bad-tempered encounter will be decided long after the final whistle.

"Delighted would be an understatement. I like coaching skilful people, and if I can get a skilful person who is tough, that's even better. Some of the skill in that first 20 minutes was probably our best of the season.

"To get three sent off, I was surprised at that, but I need to look back at it and make sure I'm correct in what I'm saying.

"I saw it as it happened but I don't know how it started and it seemed like a fight between two packs.

"Ben Thaler's a quality referee, he saw it a certain way and, once it happened, I thought we dealt with it superbly."

"Wigan were excellent for that first 25 minutes. We were 26-0 down and we hadn't really had a crack at them.

"It just wasn't good enough defensively. We just weren't there in that first 20 minutes and it's impossible to tell you why because it's Saints v Wigan.

"It's a derby game and we should have no excuse not to be there. For everything that we did well at Leeds on Monday night, we undid today and it's frustrating.

"I don't know what started it but, once it started, tempers went."