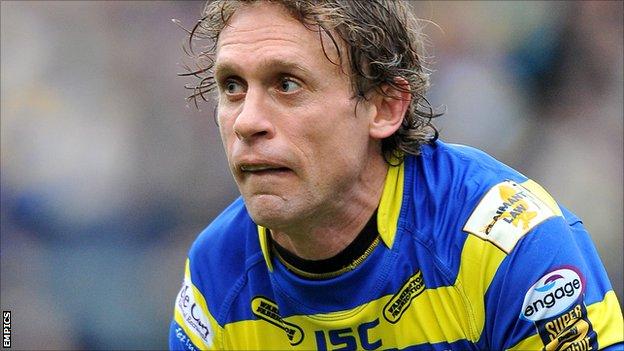 Brett Hodgson has warned Warrington that they still have plenty of work to do before they can start thinking of playing in the Challenge Cup final.

The Wire booked their spot in the last eight with a 32-16 victory against Bradford Bulls on Saturday.

Full-back Hodgson told BBC Radio Merseyside: "At the moment, we're looking at the next round.

"There's no point looking towards Wembley yet because there are still a lot of good teams left."

The 34-year-old Australian continued: "It's a superb competition. There's a different aura and a different atmosphere when it comes to playing those cup games."

As a Huddersfield Giants player, Hodgson lost to Warrington in the 2009 final.

The Wolves remain one of the favourites to lift the cup in August, although coach Tony Smith believes his team will need to improve in future rounds if they are going to win the trophy for the third time in four years.

"It wasn't the best of games and it was very frustrating for a lot of the people involved," said Smith.

"That's the beauty of the Cup. It doesn't have to be a classic performance, as long as you win."

The Challenge Cup quarter-final draw takes place at 0820 BST on Tuesday, 1 May on BBC Radio 5 live.