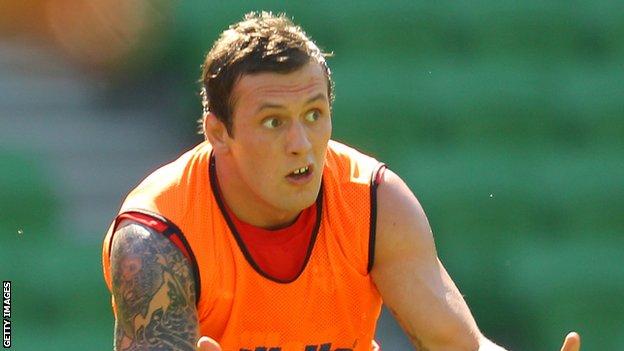 Leeds Rhinos have signed England international Shaun Lunt on loan from Super League rivals Huddersfield Giants until the end of the season.

The versatile 25-year-old, who can play at hooker and in the back row, has been unable to secure a Giants starting spot this season.

Burrow was initially expected to play through the injury.

Rhinos head coach Brian McDermott told the club website: "Shaun will give us strength in depth in a number of positions in the forwards as we enter a tough period of the season.

"He has been a quality player for Huddersfield over a number of years appearing in the Challenge Cup Final and representing England and I know he is excited about the challenge of coming to Leeds and showing what he can do at the highest level."

Lunt, who recently saw ex-Widnes hooker Scott Moore arrive at the Galpharm Stadium, added: "I was surprised when [Giants coach] Nathan Brown told me last week that Leeds had been in touch about coming here on loan.

"Normally when you go on loan it is not to another one of the top teams in the competition so I am really pleased to be joining the world champions.

"I trained with the Rhinos yesterday and the players really made me feel welcome. I need to get my head down now and work hard to make the most of this opportunity."

The 20-year-old will spend the next six weeks with the Rams.