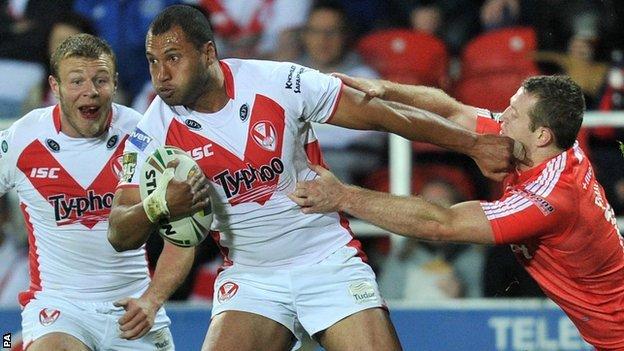 Teenager Adam Swift's hat-trick helped make it two St Helens wins in a week over Widnes with an 11-try rout.

The Saints raced to a 26-0 half-time lead through tries by Iosia Soliola, Paul Wellens, Swift and an Anthony Laffranchi brace.

Louis McCarthy-Scarsbrook continued the Vikings' torment with Andrew Dixon, Michael Shenton and Mark Flanagan weighing in with a try each.

The result keeps the Super League new boys rooted to the foot of the table with a horrific -401 points difference.

Saints, who survived a late fightback last Saturday when they faced the Vikings in the Challenge Cup to win 40-38, were off the mark on 11 minutes when the superb James Roby combined with Lomax and Wellens to put Soliola into the corner.

Roby was involved with the second try as Lance Hohaia threw a clever inside pass to put his skipper Wellens over.

Laffranchi crashed over from short range midway through the first half and combined with Roby at dummy half again, in identical fashion, for his second.

Swift took Michael Shenton's pass for his first try for the club just before the interval.

After the break Widnes were on the defensive again when McCarthy-Scarsbrook rose above their defence to gather Hohaia's kick.

Substitute Dixon powered over for his fifth try of the season and Shenton added Saints' seventh try after Chris Flannery's back pass.

Flanagan then touched down from Roby's grubber for his first Saints score since returning from Wests Tigers.

Swift grabbed his second and completed his hat-trick seven minutes from time.

"Our goal was to defend better than last week and that was achieved.

"We knew last week was not a Saints benchmark but this was just that. Offensively we were also much better."

"It is unfair to single out individuals in such a convincing team performance but Anthony Laffranchi had a great game and not many props score two tries."

"Some of our stuff was embarrassing.

"Saints were hot but the difference between our electricity last week and this was huge. We are trying desperately hard for the spark but it is very frustrating.

"I feel for the fans who see a little bit of something one week and then we follow it up like this.

"We conceded far too many penalties but that's due to frustration."