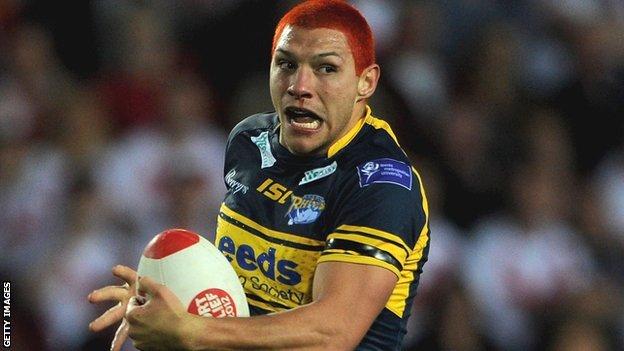 Leeds led 18-0 at half-time thanks to two tries from Ben Jones-Bishop and one each for Hall and Carl Ablett.

Broncos hit back when Kieran Dixon and Luke Dorn went over within eight minutes of the restart to close the gap to eight points.

It was the Broncos' heaviest defeat of the season to date.

A series of penalties and handling mistakes left Leeds needing some desperate defensive work as they were pinned back on their own line in the opening 10 minutes.

But it was Leeds who opened the scoring in the 25th minute from their first threatening attack. Slick passing by Kevin Sinfield, Lee Smith and Brett Delaney ended with Ablett cutting inside to touch down.

Seven minutes later Sinfield and Smith combined and Ablett turned provider to send Jones-Bishop squeezing in at the corner. Leeds had their tails up and after Sinfield was grounded just short, the ball was ferried out left for Hall to score the first of his tries.

Jones-Bishop collected his second try just before half-time after a glorious break by Ablett was carried on by Smith.

The Broncos hit back with two tries in the opening seven minutes of the second half. Dorn's long pass exposed poor marking as winger Dixon scored his second try in as many games.

Then Dorn cleverly dummied his way through, but Leeds' nerves were steadied when Hall held on to Sinfield's angled kick to score his second before repeating the act to chalk up his hat-trick.

Hall then raced in at the corner for his fourth try - to reach 11 for the season, nine of them in Super League.

"Wingers need opportunities to score and Ryan Hall hasn't had many in recent weeks.

"When he gets chances he knows how to take them. It was very pleasing that all our 10 tries came from the backs and I thought we had some very strong performances out there.

"We had to defend strongly early on because they had a really good go at us early on and it gave us the platform to cut loose."

"Some of our young players got exposed in the first half to make it 18-0, but we got ourselves back into it with tries from Kieran Dixon and Luke Dorn at the start of the second half to give us a chance before it all went wrong.

"I thought we were a lot better than the scoreline would have you believe but we have to believe in ourselves a bit more and hang in there.

"We were competitive but Leeds came up with some individual brilliance against our inexperienced players and exposed our weaknesses. There are still plenty of matches left so I haven't ruled out our chance of reaching the play-offs."