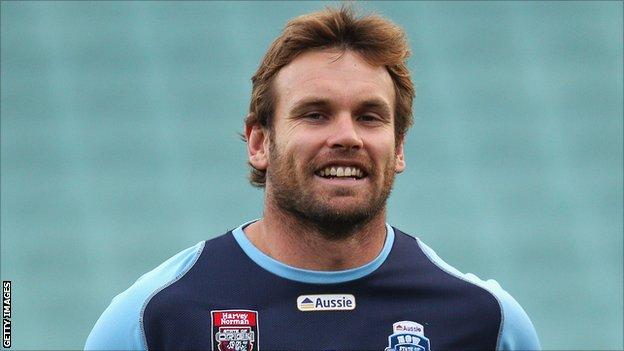 Josh Perry is well aware local rivalry is at stake when St Helens face Wigan at Langtree Park on Friday.

Injury prevented the Australian prop from playing against the Warriors at any stage during 2011.

"Everyone knows this is the game you want to be involved in," Perry told BBC Radio Merseyside.

"I wouldn't say it's hatred but there's a lot of dislike towards each other. They get behind their teams so much, which makes it even more special."

Perry continued: "There won't be any spare seats in the stadium and it's going to be roaring.

"It's going to be a massive game and something that we're all looking forward to."

As well as local pride, Wigan will also have revenge on their minds, as St Helens denied them a place in last year's Grand Final at Old Trafford.

But Saints go into the game in good form, have won their two games since the departure of Royce Simmons.

Interim coach Mike Rush said: "We need to follow on from what we did against Leeds and Warrington.

"I back our players against anybody if we're playing at our best and we've got our strongest side on the field. I think we're starting to get that attitude back."

It will be Saints' first match since the announcement that Nathan Brown will become the club's new head coach when his contract with Huddersfield Giants expires at the end of the season.

"It's good for the club to put that to bed now and Nathan can move on and continue his job at Huddersfield," added Rush.

"It's not unusual for coaches to move from club to club. It's a common part of the game.

"We need to concern ourselves with Friday and what we've got to do, and Nathan can concern himself with what he's got to do."