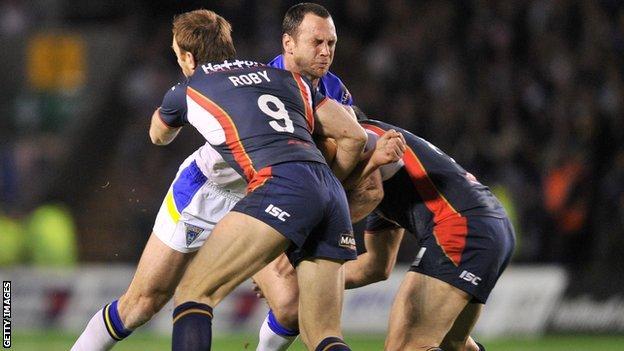 Three tries in 15 minutes set Saints on their way, Ade Gardner getting the first before Paul Wellens scored twice.

Francis Meli added another before Wire tries from Brett Hodgson and Joel Monaghan either side of half-time.

But fit-again Sia Soliola wrapped up victory before Ryan Atkins' last-minute consolation for the home side.

Rush, along with club legend Cunningham, has now started his managerial career with successive wins against champions Leeds and league leaders Warrington. But, despite enjoying being at the helm, the St Helens-born development manager still says he is not keen on making it a full-time fixture.

Warrington had returned to the top last weekend with last Friday night's narrow 22-20 win at Wigan, 48 hours before Saints, in their first game following the sacking of Royce Simmons, stunned the Leeds redheads 46-6 at Langtree Park.

But, in front of a 15,000 sell-out, the biggest-ever crowd at the Halliwell Jones, it was Saints' form that worked out the better as they blitzed Warrington with a stunning three-try burst inside the opening quarter hour.

Lomax and Wellens created the space for Gardner to score in the right corner for the third straight game - in only the third minute.

Then Wellens dived over himself on 11 minutes before getting in again just four minutes later, Lomax kicking all three conversions.

Saints were even turning down chances to kick simple penalties in pursuit of more tries and, on 23 minutes, they got a fourth when Francis Meli galloped in at the left corner.

But, just when they had the chance to take the game out of Wire's sight, Lomax missed that kick, and Sia Soliola had a try chalked off when he appeared to lose control grounding the ball over the line.

And Warrington finally found a response just before the break.

Hodgson dummied his way over, kicking the goal to claw it back to 22-6. But, even then, Saints could have restored their 22-point advantage, only for Jon Wilkin to have a try disallowed by the video referee for a knock-on.

And Saints had their lead further lopped to 22-10 six minutes into the second half when Joel Monaghan got in at the right corner.

But, after coming under sustained Warrington pressure, Soliola, back after missing two matches after being assualted on a night out, bulldozed his way over.

His try wrapped up victory 11 minutes from time before Atkins crossed late on to make the margin of defeat look a little kinder on the home side.

"Our performances have been pretty much the same each week which is the disappointment and some of that came home to roost tonight.

"The way we have been playing is giving away penalties and giving away the ball cheaply in the wrong parts of the field and Saints are in a mood at the moment where they are happy to receive that and hurt you like Saints can, which they did.

"We made a fist for a while in the second half and, after getting back to 12 points, if we had got another try maybe it would have put pressure on them, but when the clock starts to run out on you it forces you into more errors.

"A few of our offloads were silly tonight in circumstances where we were just trying to force something which is letting us down. "We will have ups and downs throughout the season and hopefully we will now get on a good run and play some good footy."

"It is a dream for a local lad to be doing what I'm doing and I would never say I don't enjoy doing it, but the club has a long-term plan and my role is in development and making sure that we always have a conveyer belt of new players.

"I would love to tell everyone I'm a genius but it's not the case. We have some very good senior players and very experienced players with hundreds of caps between them and they realise they have to roll up their sleeves and do some hard work during the week and get the rewards at the weekend.

"We are not doing anything differently. We have a culture at St Helens like Barcelona and Ajax play football and we as a town and a club need to play how we play and the senior players have really took to that.

"The likes of Josh Perry and James Roby really laid a platform for us and Sia Soliola also made a big difference. We also gave Josh Jones a debut and I give credit to the senior players like Paul Wellens and Jon Wilkin who offer guidance and togetherness so they are not left to fend for themselves."