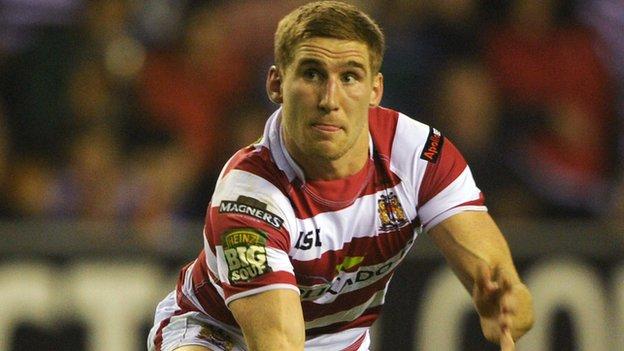 Wigan cruised back to form as they enjoyed an eight-try romp at the Salford City Stadium.

Charnley, on kicking duty in the absence of Pat Richards, landed four goals for an individual 12-point haul.

Salford briefly led 8-6 early on after tries from Dan Holdsworth and Danny Williams.

Luke Patten added a third midway through the second half, Jordan James grabbing the final score of the night in the last minute, Holdsworth adding his second conversion.

Salford were without winger Jodie Broughton for the fifth game in a row while Williams replaced Ashley Gibson on the other flank, with centre Chris Nero and prop Shannan McPherson also missing.

Wigan captain Sean O'Loughlin was out with a knee injury, while points machine Richards' thigh injury, aggravated in last weekend's narrow home defeat by Warrington, allowed 18-year-old Russell only his second start for the club.

And prop Lee Mossop returned after a two-week absence in place of the suspended Epalahame Lauaki.

Centre Goulding, who scored five tries for the City Reds while on loan in 2009, led the way with a first-half double as Wigan earned a 12th successive win against the Reds.

Although Wigan led 30-8 at half-time, Salford scored a couple of decent tries of their own through Aussie stand-off Holdsworth and winger Williams and looked dangerous whenever they got in the Wigan half. But the trouble was they were rarely allowed across the half-way line.

Salford actually had the better of the second half as both sides scored two tries apiece.

Tomkins and teenager Russell went over for Wigan, while Aussie full-back Patten and Welsh prop James crossed for Salford, Holdsworth converting both.

But Charnley, standing in with the boot for Richards, only kicked four goals from eight attempts all night - and the Warriors may need their main kicker back fit and well for the annual Good Friday clash with St Helens - and their first-ever visit to Langtree Park.

"There were a lot of penalties and I felt it was a bit inconsistent.

"We can play a bit when we have the ball but we were the manufacturers of our own downfall and got a bit sloppy.

"We have a lot of hard work to do ahead next week's game at Huddersfield."

"Sean O'Loughlin was 50-50 for this game so we decided not to risk him, but both him and Pat Richards should be okay for the St Helens game next Friday. But Jeff Lima and Harrison Hansen were outstanding.

"It was a good performance because we've had a tough week with a couple of minor injuries. And I'm happy with two points. We scored some great tries and, in the last 20 minutes of the first half we completed 100% of our sets.

"Salford are a good team and have scored a lot of points over the last few weeks. But we dropped our intensity in the last 20 minutes which was disappointing and in the end we were just waiting for the final whistle."