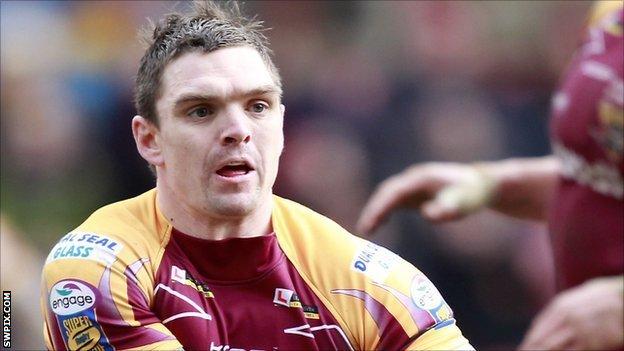 Huddersfield Giants returned to winning ways and the top of the Super League table with victory against champions Leeds Rhinos at Headingley.

The visitors took full control after the breakthrough with quick tries from Greg Eden and Jermaine McGillvary.

following last week's thumping defeat at St Helens, were forced to shuffle their pack when Rob Burrow and Brent Webb were ruled out before kick-off.

Meanwhile, the but welcomed back the experience of Luke Robinson and Lee Gilmour to the starting line up.

The first quarter of the match was largely forgettable, with loose passing and handling errors aplenty, although opposing stand-offs Kevin Sinfeld and Danny Brough both tried to force the issue with the boot.

Leeds eventually made the breakthrough through former Featherstone three-quarter Hardaker on 25 minutes, who beat Brough to a Sinfield chip-kick for his seventh try of the season and the game's opening score.

However, the lead lasted just five minutes, as Crabtree's power and size took him over the line after defence by Hardaker held up Chan just short.

Giants then grabbed the game by the scruff of the neck following the equalising try, and took the lead when Chan made up for his missed chance, coverting a powerful break by Scott Grix minutes before half-time.

Sinfield's restart went out on the full to hand Giants the advantage at the beginning of the second period, and with the visitors in the ascendancy Leeds looked to have conceded a third try when Larne Patrick went over, but Kallum Watkins did well to force the knock-on in-goal.

Brian McDermott's Leeds failed to heed the warning, and were punished twice in quick succession soon after.

Firstly, Leeds full-back Ben Jones-Bishop failed to gather a bouncing kick, and full-back Eden skipped in to score, and then moments later Jermaine McGillvary finished off a flowing break involving Eden and Brough for Giants' fourth try with more than 20 minutes to go.

Leeds introduced Liam Hood at hooker and it was he and fellow academy product Stevie Ward who lifted the hosts' fightback.

Ward gained field position when he beat McGillvary on the outside and after Giants held out through desperate defence, Leuluai powered over from close in to reduce the deficit to 10 points.

With time running out Leeds stepped up the pressure but Nathan Brown's side were untroubled and secured an impressive victory at their rivals' home.

"He's got the potential to be one of greatest players in this competition, there's no doubt about that at all.

"He's the British version of Billy Slater. That's how Billy Slater was when he was young. He can do things most other players in this competition or the NRL can't do.

"The sky's the limit for that kid. He's brilliant. He's young and with youth comes a bit of pain at times."

"A couple of quick-fire tries by Huddersfield early in the second half was probably the difference.

"Overall our performance was a lot better than last week. It's disappointing that three tries came from soft missed tackles. That's easily fixed but I would rather Huddersfield had had to work far harder for some tries.