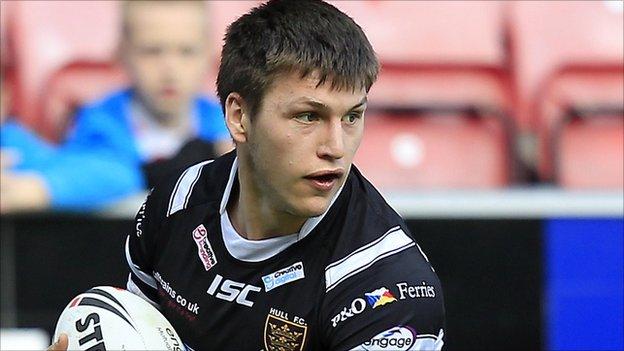 The Airlie Birds led 12-6 at the break, with tries from Richard Horne and Willie Manu, Keith Lulia replying.

But Tom Briscoe's try and Danny Tickle's late penalty made sure of the points for Hull, who are up to second.

The backdrop to the game focused little on either side's on-field form, with Bradford's impending deadline to raise £500,000 before next Friday the big talking point within the sport during the last week.

Bradford's future is in grave doubt after it emerged during the week that they need to raise £500,000 by next Friday to keep the tax man from their door.

Administration, or even a winding-up order, hangs heavy over the club with the desperation of their plight illustrated by a call to their fans to donate £100 each to reach a final £1million mark by the end of next month.

Close to £300,000 has already been raised in the four days since the club announced their worrying financial position - and they have been made offers of financial support from former players such as Jamie Peacock and Brian McDermott, as well as Widnes owner Steve O'Connor, who donated £10,000.

But, shorn of the services of Paul Sykes who joined Wakefield earlier in the week, they were dealt no mercy on the field by their Friday night hosts.

On the back of a convincing 42-28 win at Castleford, Hull were ruthless in their quest for a fifth straight win as Horne soon showed, bursting through for the first score on eight minutes.

However, the Bulls were in a battling mood, and fought back to level when Jarrod Sammut's interception was recycled by Lulia to score.

Manu put Hull ahead, a jinking step taking him in under the posts but, from that score, the hosts were made to soak up intense pressure up to the half-time hooter.

Despite failing to find a chink in the Hull defence prior to the break, Karl Pryce did find a way over the line in the second half, pouncing on Briscoe's handling error following a kick into the in-goal area.

Danny Houghton teed up Horne for a second try for Hull before Bulls scorer Lulia turned provider with a super break, feeding Bateman once he had drawn the covering defence to level for a third time.

Briscoe's score with 10 minutes to play dragged the momentum back in the Black and Whites' favour, and when Tickle made up for a missed conversion for his fourth kick of the game, Peter Gentle's side were guaranteed the points to take them second in the table behind Huddersfield.

"It was a tough win for our guys, with the inexperienced group we had out there tonight, I'm very proud of them.

"It's not win-at-all-costs, but it's two points on the line that we needed and it was good to put young players into that environment.

"There's no surprises from our side of the fence. We've had the squad training together since November. They're all capable and it's good to give them an opportunity."

"I am confident that something will happen. There is some more fundraising over the week which should pump it up even more.

"I know the board are talking to various people that are potential investors in the club which us a great thing for us."

""The rugby league community has been great and it shows what rugby league means to the people. They are very passionate. Bradford has a rich history and they don't want it to end."