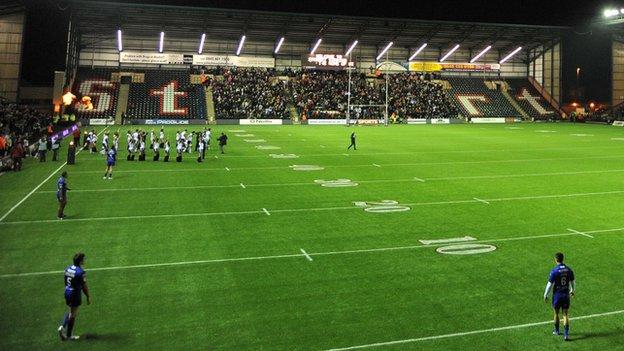 Widnes have rejected concerns raised about the safety of their artificial pitch following Friday night's Super League opener against Wakefield.

The "iPitch" at the Stobart Stadium was criticised by former Warrington full-back Richie Mathers, who posted images of grazes to his body on Twitter.

He described the surface, on which his side won 32-14, as an "absolute joke".

But Widnes claim that Mathers' injuries are more likely the result of the icy conditions the match was played in.

The club's chief executive, Julie Gaskell, stated: "We had four games on the pitch this weekend and you have to bear in mind the extreme weather. On Friday night, it went down to minus seven.

We are happy for Widnes to continue using the iPitch

"The injuries are consistent with those on any surface in those temperatures. We noted there were similar injuries from the game at Salford on Saturday.

"Our players have been training on a similar surface for the last nine months and there have been no issues. I am sure any problems would have shown up.

"We have also had five-a-side football and boys and girls tag rugby on the pitch over the last four weeks and again we have had no reported injuries."

The Rugby Football League say their match commissioner had no concerns about the surface, which is the first artificial pitch ever to be used in the sport.

"We are happy for Widnes to continue using the iPitch," said RFL spokesman John Ledger.

"The indications are that it posed no more danger to players than on any other surface over the weekend. We believe the extreme weather may have been an issue."