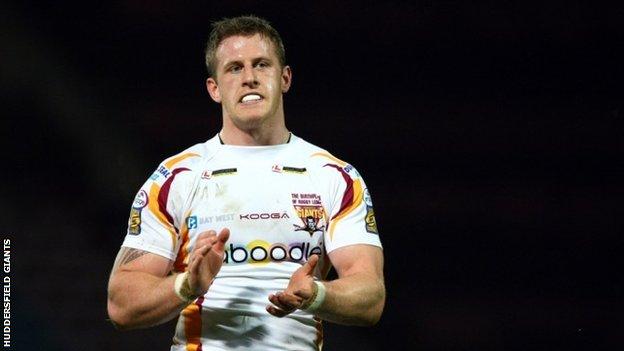 And tries for Liam Farrell and a late one from skipper Sean O'Loughlin could not turn it round for Wigan.

Huddersfield shrugged off the absence of seven first-choice players, with six regulars out through injury and new signing Tony Tonks suspended, but they knocked Wigan off their stride from the kick-off to enjoy a deserved second win at the DW Stadium in three visits.

And the hero was 23-year-old Patrick, who had been expected to miss the start of the new season after breaking a wrist in training but made a rapid recovery in time to answer his club's front-row injury crisis.

The visitors were clinging to their tenuous interval lead when Patrick went on as substitute but he grabbed two tries in 10 minutes to put them in control.

But Patrick restored the Giants' eight-point advantage when he went through Tomkins' tackle and showed a neat turn of speed to touch down from 30 metres out, Brough maintaining his 100% record with the boot to make it 20-12.

O'Loughlin gave his side renewed hope when he forced his way over from acting half-back five minutes from the end, but Wane's men were beaten.

"It was disappointing. I never saw it coming.

"I knew Huddersfield would be strong. They have some match winners. Nathan Brown did a great job saying they had so many players missing but they had some great players on the park today and I drummed into our players that they are a team that can play.

"We needed to be on the ball and we weren't, it's as simple as that. When we did get our plays on, I thought we executed them well but our last pass was poor.

"The players are as distraught as me, which I'm glad about. Five or six individual performances weren't up to scratch."

"Larne's been training for a week and half. The surgeon cleared him and, after Wednesday's session, he was really confident.

"He has scored some wonderful tries over the last couple of years but, to go around a world-class player like Sam Tomkins. He won't have that done to him by many front rowers.

"Wigan have some terrific talent, players like Sean O'Loughlin, Tommy Leuluai, Brett Finch and Tomkins, so to be able to do what we did against them, credit must go to the players."