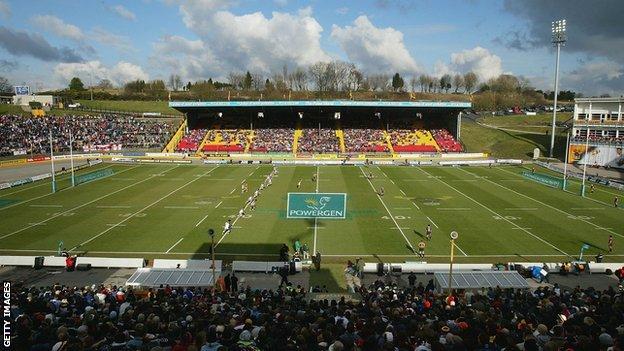 The Rugby Football League is to rent Odsal back to Bradford Bulls after buying one of the sport's most famous homes from the club.

The game's governing body has paid the Bulls an undisclosed sum for the ground that has been their home since 1934.

Chairman Peter Hood confirmed the Bulls made the approach to the RFL, hailing the announcement as "excellent news".

Odsal is famed for being filled by the highest-ever crowd to watch a rugby league game in Great Britain in 1954.

The gate of 102,569 for the Challenge Cup final replay between Halifax and Warrington was also a world record, which stood until 2000 when it was broken by Australia's Olympic Stadium.

"This arrangement is absolutely the right thing to do because it safeguards the future of one of the sport's most famous stadia," said Lewis.

"Odsal is famous throughout the world. It would be a tragedy were the venue to be lost to the sport in the way that other evocative rugby league venues have already been lost.

"We have paid market value for the stadium and the Bulls will pay market value rental to the RFL to play their home fixtures at Odsal."

Bulls chairman Hood admits that the recent collapse of plans to turn Odsal into a sporting village was a factor behind the decision to look for a buyer and that the sale to the RFL would enable the club to face the future with confidence.

"This is excellent news for Bradford Bulls, for the Bradford district and for rugby league," he said.

The sale to the RFL safeguards our immediate future

"Odsal is an iconic rugby league venue and is strategically important to the Bradford district, located as it is at the head of the city's principal access corridor.

"The sale to the RFL safeguards our immediate future and keeps all the options open once the economy recovers from recession."

A Leeds businessman, Steve Parkin, who made an unsuccessful bid to buy Wakefield last February, spoke last summer of a plan to take over both the Bulls and Bradford City to form a joint sporting club in a new stadium but nothing materialised.

The RFL already owns the ground of Bradford's neighbours Keighley Cougars and have stakes in several other grounds.