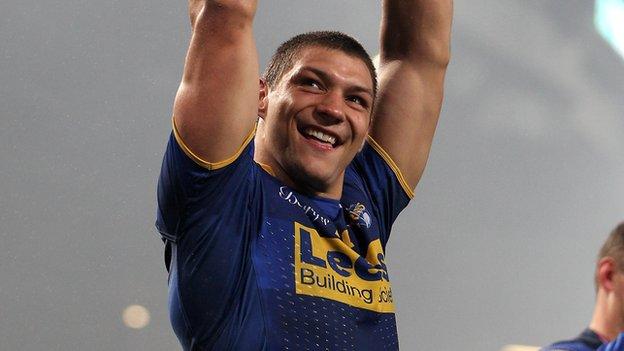 Leeds Rhinos winger Ryan Hall has pledged his long-term future to the club by signing a new deal.

The revised contract will keep the 24-year-old at Headingley for the next five years.

The England international, who began his career at Leeds, said: "I have only ever wanted to play for Leeds Rhinos.

"This contract will take me up to my tenth season at the club and the majority of my career which is a great honour and privilege."

Hall joined the Rhinos as a teenager from local amateur side Oulton Raiders and has gone on to score 107 tries in 124 appearances since his debut in 2007.

He has scored more than 30 tries a season for the last three campaigns and crossed the line for England against Australia and world champions New Zealand in last year's Four Nations tournament.

He was also on the score sheet as he picked up his third Grand Final winner's medal with victory over St Helens at Old Trafford.

"I am proud to be a rugby league international and perform for my country against the best in world," Hall added.

"We took some big steps forward last year under Steve McNamara and I am sure there are some exciting times ahead with a home World Cup on the horizon."

Head coach Brian McDermott commented: "I think as a sport we should be very happy that a player of Ryan Hall's calibre has committed his future to our game.

"Ryan is a natural born finisher who has an innate ability to get the ball over the line when opportunities come his way.

"To have consistently scored 30 or more tries in the last three seasons speaks for itself.

"However, it is not just his natural attributes that make him such a good player, he works incredibly hard on his all round game and developing his body so that he is at his best to make the most of the chances when they come his way."