Lee Briers bowed out of Test rugby with a starring performance for Wales, but Australia recovered from an early scare to ease to a 10-try Four Nations win.

Australia, already assured of a place in Saturday's final against England, finally came to life with two tries from Cooper Cronk before the interval.

A further seven tries followed as the Kangaroo class punished a tiring Wales.

Johnathon Thurston converted eight of the tries, including his own score, becoming only the fifth player to reach 200 points for Australia.

But a real upset was on the cards when Wales capitalised on Australia's sluggish start, making a mockery of the pre-match predictions that gave them little hope of staying within 50 points of the overwhelming favourites.

The home side stunned Australia with two tries inside the opening 13 minutes, with 33-year-old Briers involved in both as he aimed to leave the international stage on a high.

His perfectly weighted kick created the first as Williams won the race to the left corner to slide in for his 11th try in 12 internationals. 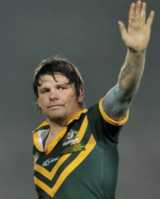 Stand-off Briers, who was joined by Chris Beasley and Ian Watson in making a final Wales appearance, then punished a Kangaroos mistake with a half-break before Danny Jones provided the decisive pass for wing Kear to score in the right corner.

The subdued Australians hit back with two tries of their own in 13 minutes, but a sense of injustice surrounded both scores.

Cameron Smith drove over from two yards for the first, the score given by the video referee despite doubts over whether the hooker had reached the tryline.

Another Briers kick then caused chaos in the Australia defence, which eventually resulted in Ross Divorty grounding the ball over the tryline.

But the video referee again decided in Australia's favour, refusing the score by penalising the home side for offside.

Cronk rubbed salt in the Welsh wound when he scored again seconds before the half-time hooter.

Thurston added a third conversion to give Australia an undeserved 18-8 lead at the break.

But the first-half lethargy was not repeated as a distinct increase in intensity yielded another two Australia tries inside the first five minutes after the break.

Daly Cherry-Evans crossed after a mere 40 seconds of the restart, benefiting from Thurston's break, and then a slick counter-attack from their own half saw Danny Boyd cross under the posts.

Wales recovered quickly, though, and another Briers kick caught the Kangaroos napping, allowing Jordan James to gather the knock-back to score.

Briers finally pierced the posts from the conversion, joining Iestyn Harris and Jim Sullivan as the only Welshmen to score 100 points.

But Australia took full control for the final half hour as they ruthlessly pounced on Welsh mistakes and a tiring defence.

Josh Morris wrapped up the scoring with the 10th Australia try, ensuring the final scoreline concealed the sense of genuine concern at half-time after Wales' unexpected enterprise.

The hesitancy caused by Briers' creativity will certainly have caught England's eye as they prepare to face their old foes at Elland Road on Saturday.