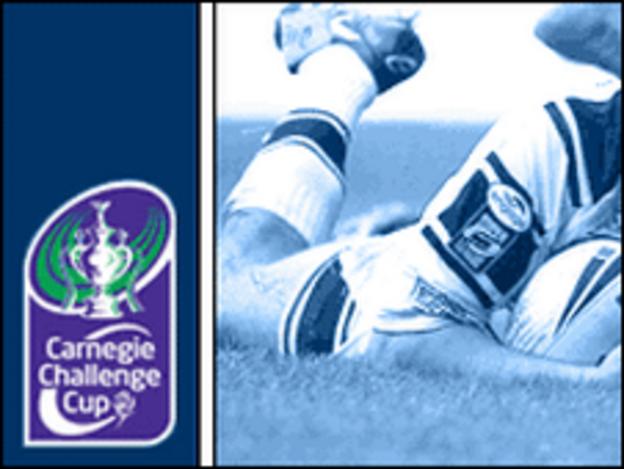 Holders Warrington will face reigning Super League champions Wigan in the quarter-finals of the Carnegie Challenge Cup on Saturday 23 July.

Aiming for a hat-trick of Wembley wins, the Wolves will go into the BBC-televised tie as favourites having won at the DW Stadium earlier this season.

Last year's runners-up Leeds are away to Hull, in the televised Sunday tie, while St Helens will host Hull KR.

The other tie is a West Yorkshire derby between Castleford and Huddersfield.

Cas, who last won the Cup 25 years ago, only squeezed through in another Yorkshire derby at Wakefield on Saturday.

In a BBC-televised classic, they scraped home 20-18, thanks to Kirk Dixon's 'golden point' penalty winner.

Huddersfield, beaten finalists in 2006 and 2009, booked their trip to Cas with a 30-16 win against Catalan Dragons.

The Hull-Leeds tie is a repeat of the classic 2005 final won 25-24 by the Black and Whites at the Millennium Stadium.

But Leeds won 48-24 at the KC Stadium in last year's fourth Round - and have won on their last two league visits too.

St Helens, seven-times winners in the past 15 years, will start favourites to reach the semi-final stage for the 11th straight year after crushing Featherstone Rovers 70-0 on Sunday.

Wigan booked their place with Sunday's 26-22 win at Bradford in the BBC's other live televised game.

But, although rampant Warrington have run up an astonishing 312 points in their last four matches, the Warriors need not feel too daunted.

Michael Maguire's men have not lost in 19 straight games away from the DW Stadium since going down 12-10 at Leeds at the same quarter-final stage of the competition almost a year ago.

And Wigan also won on their last visit to the Halliwell Jones, a narrow 22-20 victory in February 2010.

Last weekend's aggregate attendance of 35,596 for the eight Challenge Cup ties was the highest for the fifth round stage since 2005.