Britain's men's eight took the world title for a third consecutive year after winning the latest battle in their epic rivalry with Germany.

The British crew led a fierce contest from start to finish, with the German Olympic and European champions overhauling New Zealand to win silver.

The victory in the closing race on Lake Aiguebelette, France, secured Britain's 15th medal of the regatta.

It also also confirmed the eight's place at next summer's Olympics in Rio.

"I am speechless," said Reed. "That was tough. It felt like a full-out sprint." 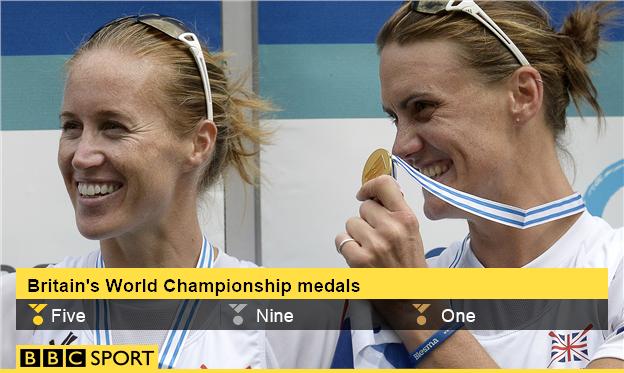 It was enough to ensure Britain end the World Championships at the top of the medals table despite failing to secure any further podium places on the final day.

Furthermore, it meant the team surpassed their 2014 tally of four golds, having already bettered last year's mark of 10 podium places.

In the women's double, Katherine Grainger and Vicky Thornley faded in the closing stages to finish sixth and last.

The European bronze medallists - who had already qualified for the Rio 2016 Olympics - were ranked as the slowest boat going into the final but went out strongly and were in contention for a medal until they were overhauled as they approached the finish line.

The women's eight were also in the frame for an unlikely medal but could not quite overhaul third-placed Canada in the final few metres.

"That was our primary goal," said De Toledo. "But we are disappointed on missing out on the medal by so little."

They will be joined in Rio by the men's double, single and lightweight four, who all secured spots in Rio after finishing second, second and third respectively in their 'B' races earlier on Sunday.

That means the British team have fulfilled their pre-championship target of earning qualification in 12 of the 14 Olympic disciplines.

All four British Paralympic crews - the men's and women's single, mixed double and mixed coxed four - will also be in Brazil next year.