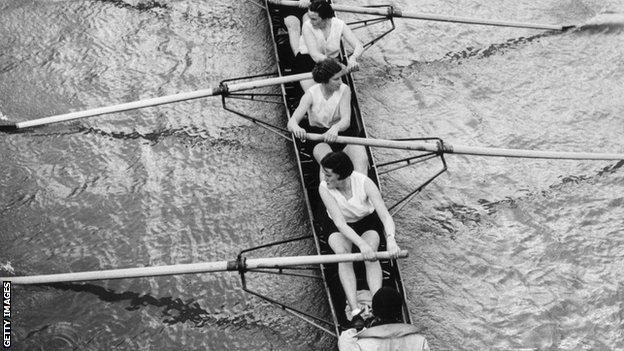 BBC Sport is paying tribute to pioneering women in sport in the run up to International Women's Day on 8 March. Here we look at the battle for the Women's Boat Race to be held on the same course and same day as the men's.

History will be made on 11 April on the waters of the Thames when the men's and women's Boat Race teams race on the same day for the first time.

It is nearly 90 years since the first women's Cambridge v Oxford University Boat Race and finally they are being allowed to compete on the same tideway course as the men and have equal television coverage and funding from sponsors.

As a proud veteran of the 2003 Women's Boat Race - I was one of the defeated Cambridge crew - it has been fascinating to be able to step back in time to trace where the race has come from, and the stories of those women who participated in it.

First stop was my birthplace, Cornwall. Not only did the first men's University Boat Race in 1829 take place in a boat built to the design of the Cornish racing shells of the time, but there were a few notable female rowers hailing from the county.

One such was Ann Glanville, from east Cornwall, and her all-female crew, who achieved notable success against men in local regattas in the 1840s. A mother to 14 children, she was even presented to Queen Victoria and the Prince of Wales, and billed as the female rowing champion of the world.

Fast forward 150 years and another trailblazing woman has been a key part of the movement to give the races equal billing: Helena Morrissey, chief executive of race sponsors, Newton Investment Management.

She was a Cambridge graduate herself, although not involved in rowing. However, she was instrumental in putting her shoulder to the rock of resistance a few years ago, and giving it a massive heave.

She refused to listen to excuses that women could not cope with negotiating the tides and bends of the men's 7000m course and until now had to make do with a 2000m course on a different stretch of the Thames in Henley, days before the men's showpiece. Many casual sports fans were not even aware a women's race existed.

So it is remarkable how far we've come. The first race, in 1927, was staged after much discussion of whether they could wear shorts, or their more demure gym tunics. One of the Cambridge rowers had to sit on a stool in front of university staff, simulating the action of rowing, to ascertain which clothes best preserved her modesty.

There were attempts to keep the sport ladylike and in the first few races they were not allowed to race side by side and instead first rowed downstream, passed the judges, who marked on style and grace.

They then raced upstream against the clock and one female athlete was heard exhorting her crew to "row like hell". This caused some upset in the media, presumably among those men who preferred their ladies rather more reserved.

And The Times report of the day stated that hordes of angry men headed to the river to shake their fists and yell at the women as they did not see it as a sport they should partake in.

As part of the filming, I met a group of ex-rowers now in their 50s, 60s and 70s to discuss their memories of the Women's Boat Race. We had a wonderful conversation over a hot cross bun or two, looking at photographs of the big hair and shoulder pads of the Oxbridge crews of the 1970s and 1980s.

One Oxford rower from 1985 brought a photo along that was published in the media of the time. It featured their male cox surrounded by his female crew, all in gowns, mortar boards and fishnet nights (above). The media were apparently fascinated by the idea of a male of smaller stature giving orders to eight women, all about six feet tall. These days it's fairly standard in the Boat Race to have one gender coxing the other.

One thing that came across to me was the attitude then, which remains the attitude of female athletes from any sport now, when faced with the glaring inequalities between men and women: "we just got on with it".

In the United States, there was a federal law called title IX passed in 1972 which prohibited discrimination on the basis of sex in any federally funded education programme or activity. But the women rowers at Yale University were still being treated as second class citizens and decided enough was enough.

In 1976, they stripped off their clothes to reveal title IX across their backs as they demonstrated to the Yale hierarchy and in a prepared statement told the university: "These are the bodies Yale is exploiting".

It did the trick. American Daphne Martschenko will be competing for Cambridge next month and told me: "It was a moment that defined history, and shaped the lives of women who were to come afterwards in sport in the United States.

"In terms of what it has done for me personally, it's opened so many doors, it's provided so many opportunities.

"It has made it such an honour not to only row for Stanford University but made it a possibility to come here, to row for Cambridge at this historic and monumental time."

I cannot wait for the Women's Boat Race in 2015, and it will be an emotional moment for me when the starting flag drops. I will be in the BBC commentary box, and I will be reflecting on my own Boat Race, and on those in the decades before who played their part in the journey to that moment. Fighters, trailblazers, but above all - women.