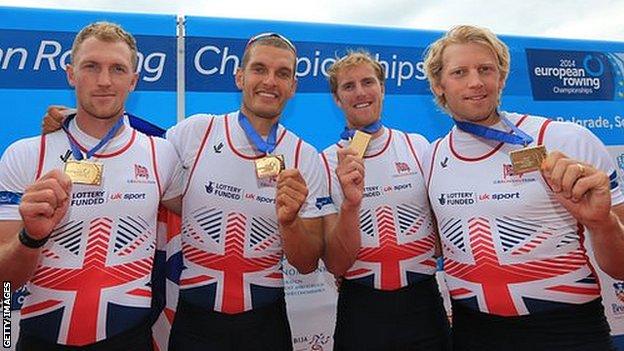 In 2014, the quartet of Triggs Hodge, Alex Gregory, George Nash and Mo Sbihi have won European gold as well as World Cup titles at Aiguebelette and Lucerne.

"This crew has always had this belief it can go really fast," he said.

"Based on the level of our performances since coming together, anything other than gold will be a disappointment."

Britain's rowers won 31 medals at World Cup and European level this year, of which 12 were gold.

The team, which is the best funded of all British Olympic sports following their success at London 2012, now switch their focus to the eight-day regatta in Amsterdam, which starts on Sunday, where they will be expected to meet their target of between three and six medals.

The men's four will be expected to lead the charge following their sparkling form this season.

The new-look quartet rowed together for a short spell last year and for a couple of weeks in February, but only formed a more permanent partnership after the GB senior trials in April.

After Gregory and Sbihi triumphed in the pairs at Caversham, just edging out the crew of Triggs Hodge and Nash, men's head coach Jurgen Grobler chose to take them out of the world champion men's eight crew and form a new-look quartet in the coxless four.

Gregory added: "It couldn't have been a better season so far, with us going unbeaten. But other crews will have improved.

"The Australians will be in the hunt for medals and the USA are a strong crew who weren't at the last World Cup. We can't be complacent."

On the women's side, Olympic champion Helen Glover will aim to defend her title in the pair when she competes alongside London 2012 team-mate Heather Stanning, who has never won world gold, in the pair.

The duo are unbeaten as a partnership since winning silver at the 2011 World Championships and are in supreme form despite Stanning, 29, only returning to the sport in December following a stint in the Army.

"The opportunity to become world champion is massive and it is one we need to take," said 28-year-old Glover, who won World Cup gold with Stanning in Aigubelette and Lucerne. "Winning is the only acceptable outcome and the only one we will be happy with.

"There is a lot more to unlock from our partnership. But that's really exciting. We've had a good season far. Now we have one more race - the big race of the year - and we're feeling very positive."

In the lightweights, Olympic champion Kat Copeland and new partner Imogen Walsh are showing signs of being the crew to beat not only at the World Championships but also at Rio 2016.

"It's really exciting to see how quickly we have progressed race-by-race and finished the season on a high with wins in the final two World Cups," said Walsh.

Copeland added: "We click into things really easily and share the same visions when we're on the water. Now, we need to maintain momentum and keep moving the boat on."