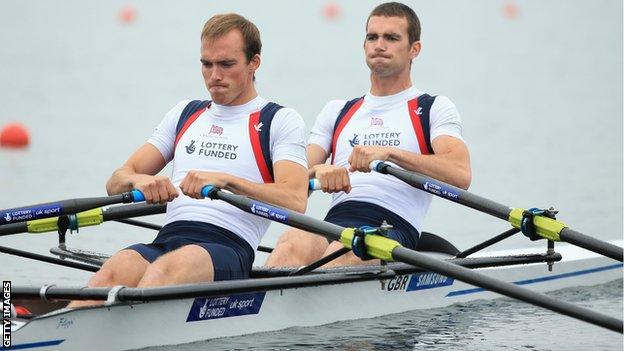 Richard and Peter Chambers secured the bronze medal in Saturday's final of the lightweight men's double at the World Championships in South Korea.

The Coleraine brothers came home in 6:38.04, behind winners Norway and runners-up Switzerland.

Italy led early on but the Great Britain boat rowed them down in the third 500m only to be caught by the Norwegians and Swiss in the final 500m.

The Northern Ireland duo are in their first year of competition as a pair.

The Olympic lightweight men's four silver medallists had won their heat and their semi-final prior to competing in the final in Chingju.

"We couldn't have done anything more - we both left everything out there and this is the worst I've ever felt after a race," said Peter, the younger of the two brothers, after the final.

"We pushed it in the third 500m to try and make a break but we couldn't hold onto the pace of the other boats in the last 250.

"We were beaten by some good boats so fair play to them.

"We are very new to the lightweight men's double and it has been incredibly difficult, but we can be proud of winning a medal."

Another Coleraine man, Alan Campbell, will compete in the final of the single sculls event on Sunday.