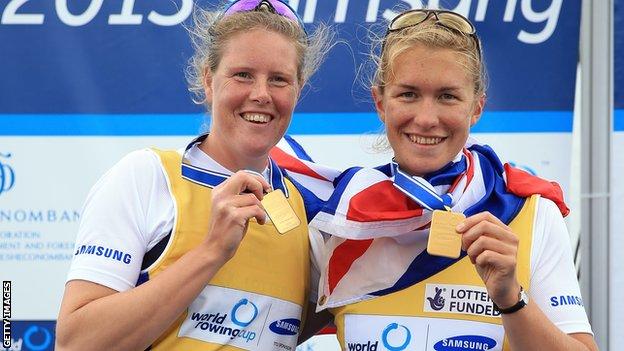 Veteran rower Frances Houghton says she has prolonged her career as a result of her previous struggles with injury.

"A lot of people have said to me 'why have you carried on?'," the 32-year-old told BBC Radio Berkshire.

"But the four years between Beijing and London I had some horrible injuries. It's only now I'm able to train full-time and have an excitement again."

Oxford's Houghton, who won World Cup gold in the women's double sculls with Victoria Meyer-Laker this weekend, added: "I love this sport, and that's why I wanted to carry on."

The four-time world champion and two-time Olympic silver medallist topped the podium alongside Meyer-Leker after narrowly defeating the Danish pair of Mette Petersen and Lisbet Jakobsen in blustery conditions at Eton Dorney.

"We knew in those kind of conditions anything could happen," Houghton commented.

"So we just wanted to go out and put our best together, and we came out best of the bunch, so that's really good."