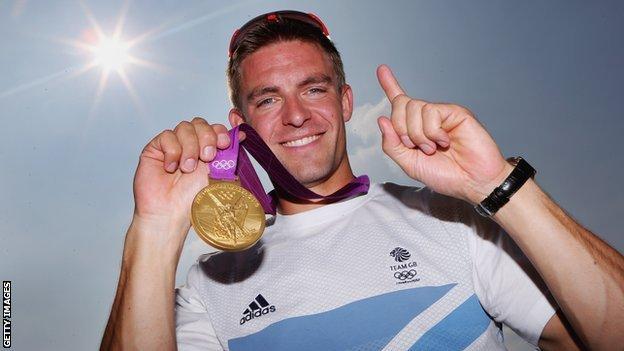 Olympic champion rower Pete Reed says gold in this weekend's World Cup would arguably mean more than a world title because it's a home regatta.

The three-day event, which starts on Friday, sees rowers race at the Olympic venue Eton Dorney for the first time since last summer's Games.

"We want to go there and win," Reed told BBC Sport.

"Home regattas come round so rarely, it makes it much more special, maybe even more than the World Championships."

Britain won four gold, a silver and two bronze at the opening World Cup in Sydney to maintain the momentum from the 2012 Olympics, which yielded four gold, two silver and three bronze

He added: "Of course we want to win a world title - but any race in front of a home crowd is very important to me."

Eton Dorney hosts the second of this year's three World Cup regattas, which provide rowers with an opportunity to test out crew combinations in a competitive environment ahead of the World Championships in South Korea, which begin in August.

However, GB performance director Sir David Tanner insist this year is a "transitional" season in which the squad can experiment and blood new talent before really knuckling down to to preparations for Rio 2016 from next year.

As a result, it's not surprising that Britain have named a strong squad - which features four Olympic champions - for this weekend's regatta, with Reed keen to impress in front of a home crowd which will look to recreate the "Dorney Roar" of support that became famous at London 2012.

'The lungs of a horse'

Pete Reed's lung capacity has been recorded at a massive 11.68 litres, almost double the male average.

Even fellow rower Sir Matthew Pinsent, who was once told he had "the lungs of a horse", was measured at a mere 8.5 litres.

"World Cups are always stepping stones for me, but this one is a little bit different because it's a home one," added Reed, ahead of the first World Cup regatta at Eton Dorney since 2005.

"So it's not just a stepping stone, it's a real highlight for me. Hopefully we can recreate that Dorney Roar, a roar which sent shivers down my spine last summer."

The eight were due to be joined by Olympic champion Alex Gregory, but the 29-year-old has withdrawn with a virus and been replaced by James Foad.

Helen Glover, who won Britain's first gold of London 2012 with Heather Stanning in the women's pair, will continue her new partnership with Polly Swann. The fledgling pair won gold in the season-opening World Cup in Sydney.

"I've got so many fond memories of Eton Dorney," Glover told BBC Sport. "It's going to be great, but I've got to remind myself that this event will be different.

"Naturally there will be some pressure, and I expect the field to be stronger, but I'm going there to enjoy it and see how fast we are relative to the rest of the world."

Vicky Meyer-Laker, who will team up with Fran Houghton in the double scull, won bronze on her World Cup debut in Sydney and is one emerging talent to watch.

She said: "Fran and I are such a fresh combination but we're working really well together and Dorney will be a great stepping stone towards the World Championships and in the long term, Rio 2016."