Hannah Mills and Eilidh McIntyre clinched gold in the 470 class, making Mills the most successful female Olympic sailor of all time after her gold in Rio five years ago and silver at London 2012.

Ben Maher then won gold in the individual showjumping event on board Explosion W after a dramatic six-horse jump-off.

With six medals guaranteed in Tokyo this is Britain's most successful Olympics in the boxing ring since 1920, when just 12 nations took part.

The first of GB's five medals on day 12 came from Brown, born a month before the 2008 Olympics in Beijing. She fell on her first two runs in the women's park skateboarding final before posting a score of 56.47 to make the podium.

The teenager replaces Sarah Hardcastle as Britain's youngest summer Games medal winner - the swimmer was 15 years and 113 days when she won silver and bronze in Los Angeles at the 1984 Olympics.

But there was a heartbreaking end to world champion Katarina Johnson-Thompson's heptathlon medal hopes.

The 28-year-old, who was battling to overcome a left Achilles problem before the Games, sat fifth after three events but pulled up with a right calf injury in the 200m and was disqualified from the race for leaving her lane.

How are GB doing? 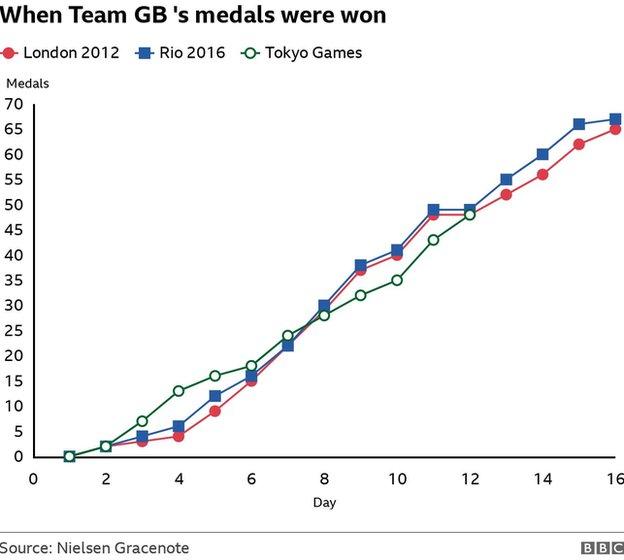 Simon Gleave, head of sports analysis, Nielsen Gracenote said: "Great Britain have closed the gap with the Rio and London Olympics and now have 48 medals after 12 days of competition compared to 49 in 2016 and 48 in 2012.

"However, at both of those Olympics, sailing, taekwondo and triathlon were still going on in the last four days of the Games so expect 2021 to fall behind again on total medals won."

Brown beat the previous record of Team GB's youngest Olympic medal winner by more than two years while also becoming the youngest competitor at a summer Games for her country.

Hinton was 13 years and 44 days when she swam at the Amsterdam Games in 1928, and that landmark stood for almost a century.

Until Wednesday, that is, when Brown - 16 days younger - began her women's park skateboarding campaign at Ariake Urban Sports Park.

Had the Games not been postponed by a year, Brown would have lowered that summer record further, though figure skater Cecilia Colledge retains the overall accolade for Britain - she entered the 1932 Winter Olympics in Lake Placid aged 11.

Brown qualified for the final but fell during her opening two runs to set up a tense final attempt.

But the Japan-born teenager - who had a heavy fall in training last year that saw her fracture her skull, break her left arm and wrist, and suffer lacerations to her heart and lungs - delivered a score of 56.47 to climb into the bronze-medal position.

"This is incredible. It feels unreal. I'm so happy to be here. I'm blessed," said Brown, who added she would now "hang out with friends and party".

"I was definitely bumped, I fell twice, that made the last run feel even better. All the girls are ripping it, it was insane, it was a super-sick final."

Britain's stellar Olympics continued on the water, with Mills and McIntyre's success taking the nation's sailing medal tally to five, of which three of those are gold.

The GB pair finished fifth in the 470 medal race, but their earlier performances meant it was enough to hold off silver medallists Poland and France in bronze.

Their celebrations were put on ice briefly after a protest was lodged by bronze-medallists France.

But 33-year-old Mills, one of Team GB's flag bearers at the opening ceremony, did not have to wait long to have her third Olympic medal confirmed.

"It's absolutely mad," said Mills. "Growing up, like a lot of Olympians, I dreamed of being here one day and standing on top of the podium.

"To do it twice with Saskia [Clark] and with Eilidh this time, I've had two incredible crews to sail with and I feel incredibly lucky."

McIntyre follows in the footsteps of her father, Mike, who won gold in the star class at Seoul in 1988.

Maher holds his nerve in jump-off

Maher, 38, was thrust into a six-horse jump-off and completed his run in 37.85 to pip Sweden's Peder Fredricson by 17-hundredths of a second, with the Netherlands' Maikel van der Vleuten taking bronze.

It is a second Olympic medal for Maher after winning gold in the team jumping event at London 2012.

"I'm getting married in a couple of weeks and that makes this all the more special - but my fiancee knows she has to share me with Explosion," he said.

Whittaker said his ambitions before Tokyo 2020 were to claim Olympic success and become the mayor of Wolverhampton.

The 24-year-old returns home draped in Olympic silverware after being edged out of gold by Cuba's Arlen Lopez.

Whittaker lost the light-heavyweight final on a split decision as Lopez added the title to the middleweight gold he won at Rio 2016.

"Wolverhampton's mayor, bless him, did a little video for me wishing me luck, he said that if I get the gold, I get the chain - I didn't get the gold so he can keep it for a bit."

The 29-year-old was stopped in his semi-final against Uzbekistan's Bakhodir Jaloolov after a cut he suffered in the previous round reopened above his eye.

What else happened on day 12?

The GB women's hockey team saw their title defence come to an end as they lost 5-1 in their semi-final against the Netherlands at Oi Hockey Stadium.

They face India in the bronze-medal match on Friday.

Britain's Shauna Coxsey missed out on a place in the final as sport climbing made its Olympic debut.

On the track, Laura Muir reached the 1500m final with a run of four minutes 0.73 seconds and Andrew Pozzi progressed to Thursday's men's 110m hurdles final.

Lizzie Bird finished ninth in the women's 3000m steeplechase in a British record 9:19.68, while Jodie Williams earned a place in the women's 400m final and Nick Miller finished sixth in the men's hammer.

Alice Dearing, 24, made history as the first black swimmer to represent Britain at an Olympics, finishing 19th in the women's 10km marathon event.

American Sydney McLaughlin reeled in rival Dalilah Muhammad to win gold in a very fast women's 400m hurdles - and broke her own world record in the process.