A silver for Kye Whyte in the BMX men's race was Britain's first in the event at an Olympic Games, and a first gold quickly followed through Shriever in the women's race.

The men's eight won a rowing bronze and Bryony Page added another in the women's trampolining on day seven as Great Britain remained sixth in the medal table.

GB finished the Games with two rowing medals, their lowest rowing medal tally at an Olympics since they won two at Atlanta 1996 and the first time they have not won at least one gold since 1980.

Friday brought the start of the athletics in Tokyo, with Dina Asher-Smith qualifying second in her opening 100m heat.

But there was a shock in the men's tennis as Novak Djokovic's hopes of completing a Golden Slam were ended by Germany's Alexander Zverev in the semi-final.

How are Great Britain doing in the medal table? 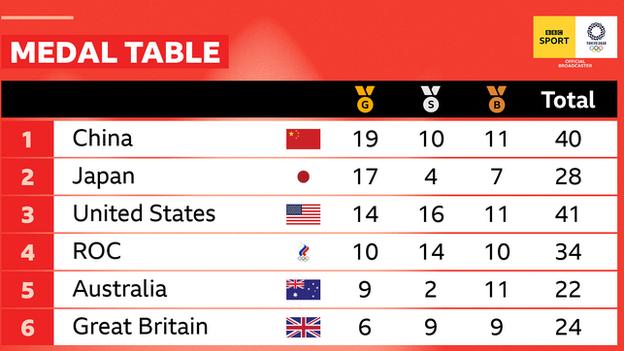 "In London, Team GB had eight gold medals at this stage whereas in Rio, the team had won seven."

Round-up of other news from Friday

From crowdfunding to Olympic gold

Shriever had to fund her own qualification campaign after UK Sport cut its support for her event following Rio 2016, and two years ago she said she needed to raise a "worrying" £50,000 through crowdfunding.

The 22-year-old, who also worked part-time as a teaching assistant to cover training costs, held off two-time Olympic champion Mariana Pajon from Colombia to win on her Olympic debut.

"Honestly, I'm in shock. To even be here is an achievement in itself," said the Essex cyclist.

"To make a final is another achievement in itself. To win a medal, let alone a gold medal, I'm over the moon."

Shriever's gold meant GB became the third country, after France and the Netherlands, to win in all four cycling disciplines - BMX, mountain bike, road and track.

Nicknamed the Prince of Peckham, 22-year-old Whyte has fought back from serious injury to earn his place on the Olympic podium.

Scott added to his 4x200m freestyle relay gold and 200m freestyle silver by finishing 0.28 seconds behind China's Wang Shun in the 200m medley.

Although the 24-year-old Scot again narrowly missed out on a first individual gold, he could become the first British Olympian to win four medals at a single Games when the 4x100m medley takes place this weekend.

"It is amazing," Greenbank told BBC Sport. "I am so happy - over the moon and a bit lost for words, I am not going to lie."

In the rowing, GB men's eight took bronze in the final race of the Tokyo 2020 regatta, pipped to silver by Germany as New Zealand took gold.

Vicky Thornley was edged out of a medal despite a late push in the women's single scull, finishing 0.67 seconds off bronze.

It was Britain's sixth fourth-placed finish at the Sea Forest Waterway, while they won two medals.

They were the leading rowing nation at Beijing 2008, London 2012 and Rio 2016, claiming six, nine and five medals respectively at those Games.

Page, who became the first Briton to win an Olympic trampolining medal in Rio, backed that up with a bronze in Tokyo.

The 30-year-old qualified with the third-best overall score and took the lead in the final with a score of 55.735, but Chinese pair Lingling Liu and Xueying Zhu claimed gold and silver respectively.

Athletics under way in Tokyo

Asher-Smith, who is bidding to become the first British woman to win an Olympic individual sprint gold, reached the semi-finals with a run of 11.07 seconds.

Daryll Neita and Asha Philip finished second in their heats to qualify for Saturday's semi-finals.

Eilish McColgan and Jess Judd both failed to progress in the 5,000m, with McColgan complaining of having her legs repeatedly clipped by other runners' spikes, but Cameron Chalmers, Emily Diamond, Zoey Clark and Lee Thompson reached the final of the new 4x400m mixed relay.

What's coming up on Saturday?