You might forgive Laura Trott and Jason Kenny for leaving Rio rather full of themselves. Five competitions between them, five golds won. As of Tuesday night, had the couple been a country they would have sat 13th on the medal table, above Jamaica, Kenya and Brazil.

That would be to misunderstand what makes them tick. This is a couple who got engaged while on the sofa watching an episode of EastEnders.

You might think too that it would get competitive around the breakfast table in the cottage they share just outside Knutsford in Cheshire. Kenny now has six Olympic golds from three Games, more than Sir Steve Redgrave and Sir Bradley Wiggins. Trott has four, more than any other British woman, and from one fewer Olympics.

That would be to misjudge their relationship. Cycling superstars on their own, together they can be almost ordinary, almost invisible. After the gold rush, after their tearful embrace in the Rio velodrome with the world watching on, that may be about to change.

"The difference in their characters is what makes it work for them," says Trott's father Adrian.

"Until he gets to know you, Jason is a little bit shy. He's quiet and understated. Laura is bubbly, chatty, just as you see in her interviews.

"If they were both like Jason, God only knows how they'd talk about anything. And God forbid having two Lauras in a household!"

The relationship between the two began in the build-up to London 2012, with Kenny about to come out of Chris Hoy's muscled shadow at his second Olympics and Trott about to experience her first.

"I remember seeing Laura at the velodrome years ago," says Kenny's mother Lorraine.

"I said to my husband, 'Flipping heck, you need to watch this young lady.' She was in the elimination race, only a tiny thing, and she kept sprinting over the top of everyone. She was amazing.

"The first time I knew something was happening between the two of them was when Jason phoned me up and said, 'I'm bringing Trotty home for a bacon butty.'

"She made herself at home straight away. Into the house, sat down, feet up on the sofa.

"We liked her from the off. She's a girly girl, so I can talk make-up and clothes to her. It's such a treat - having had two sons, I've had years of remote-control cars and standing out in the rain, and at last I can talk to someone about posh shoes."

Trott and Kenny are not the first couple to both win Olympic golds.

Some (Steffi Graf, ladies' singles 1988, Andre Agassi, men's singles 1996) have carried more global renown. Others have also won gold in the same sport at the same Games, most recently triathletes Jan Frodeno and Emma Snowsill at Beijing in 2008. But no-one at a summer Games has more. No-one else gets even close.

Neither has the British duo finished. Trott is 24, Kenny 28. The next Olympics in Tokyo are in their sights.

"When I first met Laura, what stuck in my mind was how she was on what she wanted to achieve," says her agent Luke Lloyd Davies.

"She said to me, 'I want to be the most decorated British Olympian of all time'. I remember thinking, for a 21-year-old to have that determination is remarkable.

"She reminds me of [former England rugby union player] Jonny Wilkinson - that same dedication, the way nothing will faze her in competition. Off the bike she is a really sweet 20-something. She likes getting dressed up, she dreams of Mulberry bags and Prada shoes. But when her peers are out partying, she is burying herself in training."

And there is nothing glamorous about the sessions each put in at the velodrome at Manchester's Sportcity each day. Lap after 250m lap, staring at the black line and scuffed boards, round and round, lactic in the legs, fire in the lungs.

"It hurts so badly," Trott once told me. "It's like your legs are getting squeezed. You try to fight against it, but it's horrible, and they're just getting tighter and tighter. You're going slower and slower."

Nothing has come easy. Born six weeks premature with a collapsed lung, Trott spent the first weeks of her life in intensive care. As a child she suffered serious asthma; at the exact moment she first sat on a bike, aged four, her big sister Emma - who would go on to race professionally for the Dutch team Dolmans-Boels - was crashing and breaking her leg at the bottom of the same hill.

As a young girl she preferred trampolining to her bike, only to be forced to give it up after repeatedly passing out in mid-air. "I kept getting dehydrated during sessions, because you had to go out of the room to get a drink, and I was like, 'Nah, I'll carry on bouncing'."

That's the heroic stuff. Not everything she does ends in such glorious success,

"Laura is the sort of person who can ruin a baked potato in a microwave," says Adrian.

"We've always cooked with gas at home, but when she first moved into the British Cycling academy flats in Manchester, they had electricity instead. She put a potato in the oven to bake and thought she'd turned the gas on - except she'd put the grill on instead. Pretty soon it was on fire. She smoked the whole flat out."

So it is that Kenny tends to be entrusted with kitchen duties.

"He is a very good cook," says Lorraine. "He now does a brilliant Sunday roast, although he never used to cook when he lived at home. He says Laura is the bad influence, that she's the one who buys the chocolate.

"He gets his sporting genes from me. I used to run 100m and 200m. His dad Michael is very self-disciplined, and Jason has inherited that from him.

"Unlike me, he copes well under pressure. I have to force myself to watch him in big finals. I used to put my hands over my eyes, but then he lost a race when I was doing that so I've had to go back to actually looking.

"When they were younger, we took both our boys to different sports - they were lively lads, so we were trying to keep them out of mischief. We were just an ordinary family, and he was an ordinary boy doing ordinary things.

"He's not changed at all. He's just Jason. His elder brother Craig is the chatterbox, so maybe Jason thought he never needed to talk. But he has a fantastic sense of humour. It's so dry I think sometimes people don't get it."

When they return to the UK, Trott and Kenny will wind down by walking their two dogs, springer-poodle crosses named Pringle and Sprolo. In September they will get married. Already they have turned down an offer to have it featured in a magazine.

Fame has never been the driving force. Kenny may have 54,000 followers on Twitter, but he last tweeted in early July. Trott may have won more Olympic gold medals than any other British woman, but the motivation remains pure.

"It isn't a job to me, but if it did feel like one, it would be a dream job," she says. "All I do is ride my bike for four hours a day and then lie on the sofa for the rest of it. I don't feel like I'd ever fall out of love with it."

And each understands exactly what the other is going through. How could they not, when together they have turned a cottage in Cheshire into a medal factory?

"If I was in a relationship with someone outside cycling," says Trott, "just imagine how hard it would be. I'd have to explain everything from scratch." 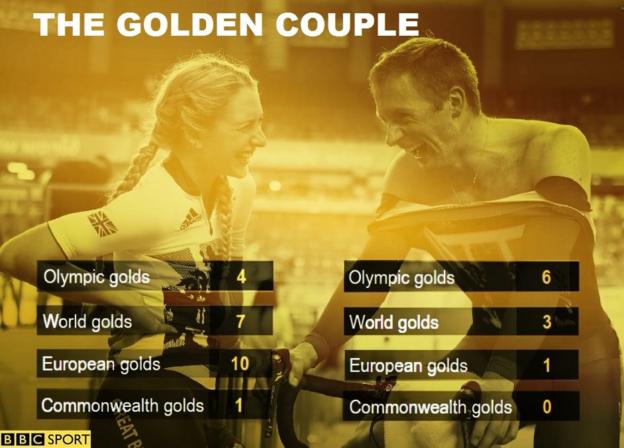