The 2016 Olympic Games officially start in Rio on Friday with the opening ceremony at the Maracana Stadium.

Athletes from 206 nations and a refugee team are in Brazil to compete in 28 sports and be watched by a global audience of billions.

The build-up has been dominated by a Russian doping scandal, the Zika virus and issues with the city's security, infrastructure and venues.

But it is time for the sporting action to take centre stage.

When does it start?

The Games - held in South America for the first time - officially take place between 5 and 21 August, but they have actually already started.

The opening ceremony is at midnight BST on Friday night but the action kicked off two days ago with the women's football.

An estimated three billion people will watch the ceremony, which has taken five years to produce and includes 300 dancers, 5,000 volunteers and 12,000 costumes.

Brazilian supermodel Gisele Bundchen and Briton Dame Judi Dench are confirmed to have roles in the production before the 207 competing teams take part in the Parade of Nations.

You can watch the opening ceremony on BBC One and online, with further coverage on BBC Radio 5 live, from 23:40 BST on Friday.

Who is taking part?

There will be 10,500 athletes from a record 207 teams competing in Rio, including the Refugee Olympic Team, while it will be the first time Kosovo and South Sudan have taken part in the Games.

The Refugee Olympic Team will compete under the Olympic flag and has 10 members - five from South Sudan, two from Syria, two from DR Congo and one from Ethiopia.

With 554 athletes, the United States has the largest Olympic team, but 100m runner Etimoni Timuani is the only athlete from the South Pacific nation of Tuvalu.

The Rio Games will be the first to feature Olympians born since the year 2000 - and the youngest is 13-year-old Nepalese swimmer Gaurika Singh.

The build-up to Rio has been overshadowed by events in Russia, after the World Anti-Doping Agency (Wada) report into state-sponsored doping in the country.

It seemed at one stage that no Russian athletes would be at the Games after Wada recommended a blanket ban.

But the International Olympic Committee (IOC) said individual sporting federations must rule on whether Russians can compete.

Their decisions were then ratified by a three-person IOC panel.

On Thursday, the IOC cleared 271 Russian athletes from the country's original entry list of 389, though 67 of its 68 track and field athletes have been barred by the sport's governing body.

Brazil is in a deep recession and political crisis, while protests marred the arrival of the Olympic torch in Rio on Wednesday.

A New Zealand jiu-jitsu athlete claims he was kidnapped in Rio, while Chinese state media criticised security after women fencers were robbed and shooting team members found "unauthorised payments" on their credit cards.

Brazil has drafted in 85,000 security personnel from 55 countries who will be stationed at the sport venues, Olympic Village, airports and main roads - almost twice as many as were at the 2012 London Olympics. There is also 200km of security fencing being used.

More than 500,000 tourists are expected to come to the Games and organisers say more than one million of the 7.5 million tickets remain unsold.

There have also been issues with the Olympic Village and the sailing venue.

Australia initially refused to move into the village, in the Barra da Tijuca neighbourhood, citing electrical problems, gas and water leaks among other issues in their building.

When they did eventually move in, the team were evacuated for a small fire and returned to their rooms to find essential equipment had been stolen.

At the sailing venue in Guanabara Bay, a taskforce removed 25.4 tonnes of floating rubbish during last year's Olympic test event.

But Rio officials admit they have failed to keep up promises to clean the water and the Associated Press says swallowing just three teaspoons of water from the bay is likely to lead to illness.

This is not the first time a host city has been criticised for its preparations, but the IOC says Rio is now "ready to welcome the world". 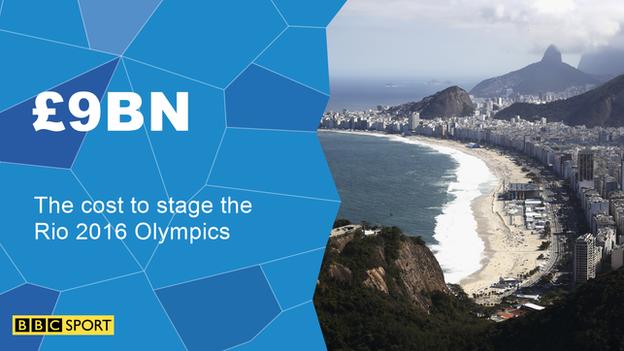 And then there is Zika

Brazil is at the centre of an outbreak of Zika virus, that is spread by mosquitoes and can lead to birth defects.

It is so serious the World Health Organisation has recommended pregnant women avoid travelling to the Games - but mosquitoes are rare in August and in June it recommended the Games not be moved or cancelled.

That advice has not stopped a number of the world's top golfers and tennis players withdrawing, citing Zika fears.

But what about the actual sport?

Competitions will take place across 32 venues in Rio, with football matches also scheduled for the cities of Belo Horizonte, Brasilia, Manaus, Salvador and Sao Paulo.

There are 306 events in 28 Olympic sports but none are bigger than the 100m sprint final and the world's fastest man Usain Bolt.

The Jamaican is aiming for an unprecedented triple triple, as he tries to win the 100m, 200m and 4x100m relay titles for the third time - and his battle with American sprinter Justin Gatlin is likely to be a highlight of the Games.

USA swimmer Michael Phelps, the most decorated Olympian of all time, will be looking to add to his 18 gold medals.

Brazil's Barcelona striker Neymar will once again carry the hopes of the home nation as they go for gold in the men's football.

Among those who miss out are top tennis players Roger Federer and Stan Wawrinka, NBA stars Stephen Curry and LeBron James and a number of golfers.

Rio marks the return of golf and rugby to the Olympics.

Golf is returning after a 112-year absence but without more than 20 of its top players.

In fact, only four of the top 10 will be in Rio - and McIlroy said he probably will not even watch television coverage of golf at the Games, preferring "track and field, swimming, diving, the stuff that matters".

Rugby sevens will be making its debut at the Olympics, although rugby union featured regularly at the Games until 1924.

Great Britain's athletes have been set a minimum target of winning 48 medals, which would make Rio their most successful overseas Olympics.

Fellow defending Olympic champion Jessica Ennis-Hill will be up against team-mate Katarina Johnson-Thompson in the women's heptathlon.

Nicola Adams, who became the first British woman to win Olympic boxing gold in London, will be out to defend her title, while cyclist Sir Bradley Wiggins could become Britain's most decorated Olympian with gold in the men's team pursuit.

What time are the big events?

Rio is four hours behind the UK and most of the gold medal events will be late evening/early morning so be prepared to become a night owl or an early riser.

Britain's first gold medal could go to Chris Froome or Lizzie Armitstead as they go in the men's and women's road race on Saturday and Sunday.

Swimming dominates the early part of the Games with the track and field events starting on Friday, 12 August.

The highlight of the action inside the Olympic Stadium is the men's 100m final at 02:25 BST on Monday, 15 August, so set your alarm clocks.

Saturday, 13 August sees a potential London 2012 'Super Saturday' repeat, with Ennis-Hill in the heptathlon, Farah in the 10,000m and Greg Rutherford in the long jump.

Right here on the BBC.

The BBC will bring you live coverage of every gold medal at Rio 2016 across TV, radio and digital platforms - this will be the first mobile Olympics.

BBC TV will broadcast more than 3,000 hours of coverage, including 550 hours on BBC One and BBC Four, while Radio 5 live will have extensive live coverage.

Up to 24 live video streams will you show every moment.