Usain Bolt won the men's 200m to claim his second Rio 2016 gold, his eighth at an Olympics, and keep alive his hopes of an unprecedented 'treble treble'.

Britain's Adam Gemili clocked the same time as Lemaitre, but was denied his first Olympic medal in a photo finish.

The Jamaican, who said in February he would retire after the 2017 World Championships, has won all eight Olympic finals in which he has appeared.

"The fact I came here and executed what I wanted to is a brilliant feeling," he told BBC Sport.

"I wasn't happy with the time when I crossed the line but I'm excited I got the gold medal - that's the key thing." 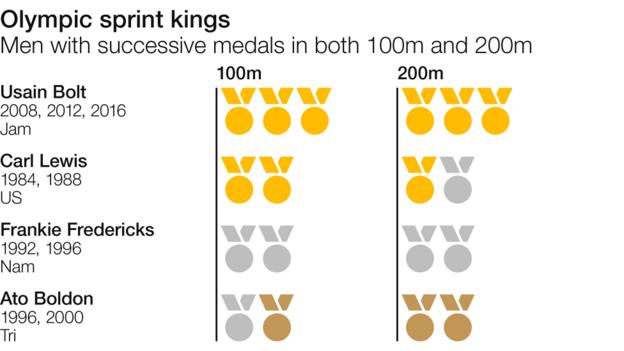 "What else can I do to prove I am the greatest? I'm trying to be one of the greatest, to be among Ali and Pele," added Bolt.

Bolt believed he could break his world record of 19.19 and even go under 19 seconds in Rio's Olympic Stadium.

So the slow time - by his standards - left the Jamaican gesticulating angrily as he crossed the line more than two tenths of a second ahead of De Grasse.

But Bolt quickly broke into a beaming smile, celebrating with a trademark 'Lightning Bolt' as thousands of fans chanted his name.

Gemili, 22, was competing in his first Olympic 200m final and was not tipped to challenge after scraping through as one of the two fastest semi-final losers.

But the 2014 European champion, running in lane two, clocked a time of 20.12 - leaving him just three thousandths of a second behind Lemaitre.

"I am heartbroken, I put so much into that run," he said. "I lost my form at the end and to get so close at the end is heartbreaking. I am absolutely gutted."

"I expected a little faster but the race is what it is. Usain Bolt was straight into the lead and never relinquished it. This was a quality race.

"You could not separate the guys for bronze. I don't think Adam Gemili could have done more to get that bronze.

"If you look at his race and his position, he finished ahead of guys like [former Olympic and world 400m champion] LaShawn Merritt."

"Usain Bolt was so aggressive out of the blocks. Andre de Grasse said he wanted to go with Usain and that is what he has done. If I am honest, many of the athletes will be disappointed with their times.

"My heart goes out to Adam Gemili. To be fourth with the exact same time as third place, Adam will be devastated no doubt but he is still fourth in the world, he has to remember that and he has a bright, bright future ahead of him."

"What other athlete can turn even former Olympic champions giddy? While Usain Bolt was weaving his way through what seemed a never-ending line of journalists, on the sidelines was four-time Olympic champion Sanya Richards-Ross, shouting his name, begging for him to flash a smile at her so she could capture it on her smartphone, tell people 'I was there'.

"The benefit of also having an Olympic gold in the bag is access, so while others simply continued to yell his name, Richards-Ross was allowed to join the throng of journalists and get the picture she seemed to crave nearly as badly as Olympic gold. But just like anyone else who gets a selfie with the greatest sprinter who has lived, she seemed to bounce back to her seat - overawed, overjoyed. No-one can do what Usain Bolt does either on or off the track."