"Somebody said I can become immortal," said Bolt. "Two more medals to go and I can sign off. Immortal."

De Grasse took bronze in a personal best of 9.91, ahead of Bolt's Jamaican team-mate Yohan Blake.

There was no British interest in Sunday's showpiece as CJ Ujah and James Dasaolu were eliminated in the semi-finals.

"It wasn't perfect today, but I got it done and I'm pretty proud of what I've achieved," he said. "Nobody else has done it or even attempted it.

Bolt was slower out of the blocks than 34-year-old Gatlin, who was aiming to regain the title he won at Athens 2004.

But the Jamaican surged through from 60 metres to pass Gatlin and comfortably win his seventh Olympic gold.

Bolt received a hero's reception as he walked out into Rio's Olympic Stadium before the race - and the crowd chanted his name after his victory, too.

"It wasn't about the time, it was just about winning the gold and going out on top," said Michael Johnson, four-time Olympic champion.

Bolt, who said in February he would retire from athletics after the 2017 World Championships, competes in qualifying for the men's 200 on Tuesday, with the 4x100m relay beginning on Friday.

The world record holder at 100m and 200m showed an expectant Rio crowd he was in great shape by clocking a season's best 9.86 in his semi-final.

The sport's greatest showman then produced an even better run when it really mattered to send the Olympic Stadium into raptures.

"After the semi-final, I felt extremely good," Bolt added.

"I wanted to run faster but with the turnaround time - we normally have two hours but we had one hour 20 minutes - it was challenging. This is what we train for. I told you guys I was going to do it. Stay tuned. Two more to go."

"I didn't expect the race to unfold the way it did. Gatlin got a great start but it was always within Bolt's reach. Gatlin knew that this was not going to happen, that he was never going to be able to beat a healthy Usain Bolt."

"He still looks like he really enjoys this. He gathers titles like daisies in a field. Our sport has a lot of critics and it's going through dark times, but we should not forget that this is what can be done. He is almost God-like."

Basketball star LeBron James:"Nothing u can do vs that cheetah! #Bolt"

Former champion jockey AP McCoy:"Unbelievable from @usainbolt bet he wishes he was a racehorse, he'd have some craic at stud!!" 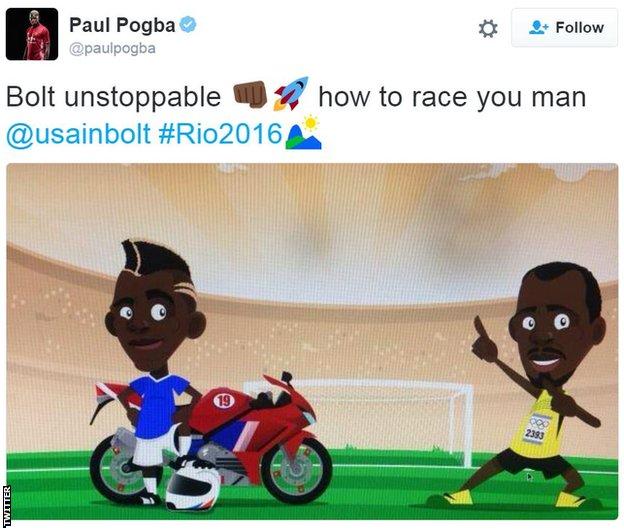 In stark contrast to Bolt's reception, Gatlin walked out to the start line to a chorus of boos, but he was unmoved.

He insisted his rivals respected him and urged the critics to get to know him, telling BBC Radio 5 live: "I have worked hard to get on the podium. I'm honoured to be here for my country."

Gatlin's first drugs ban in 2001 was reduced from two years to one after he proved the amphetamines he was taking were for an attention deficit disorder.

He then tested positive for testosterone in 2006, a year after winning the 100m and 200m double at the World Championships.

The American served a four-year ban that was twice reduced, first from a lifetime then to eight years.

Gatlin returned to the track in 2010, claiming Olympic bronze at London 2012 and losing to Bolt in the 2015 World Championships.

Many thought Gatlin could beat Bolt in Rio.

The Jamaican injured a hamstring at the end of June, while Gatlin had recorded the fastest time of the year in July, clocking, 9.80.