He combined with Ed Clancy, Owain Doull and Steven Burke to complete the 4km race in three minutes 50.265 seconds to beat Australia by almost a second.

"It was gold or nothing. I'll be hungover tomorrow," said Wiggins.

"I'm trying to soak it all up. It was a horrible race to be in. It's over in a flash.

"It's a relief. Eighteen months ago there were doubts about whether I could come back and do this."

Asked whether he will now retire, the 2012 Tour de France winner said: "My kids need a proper dad in their lives. My wife needs a proper husband.

"I wanted to go out on top, and it was one of the best finals ever. Hats off to the Australians.

"I'm not doing Tokyo 2020. I'm happy and content with everything I've achieved."

GB's second track gold of the Games, following the men's team sprint victory, came in thrilling fashion, as world champions Australia led by 0.7 seconds at the halfway mark, before GB reeled them in and then pulled away in the final 500m to win by 0.83 seconds.

It cemented Britain's recent dominance in this event at the Olympics, having won gold at the past three Games. Wiggins was part of the 2008 success, but focused on the road to take time-trial gold at London 2012.

Clancy and Burke were part of the team that set a new world record at London 2012 and, along with Doull and Wiggins, sent that mark tumbling twice in Rio - in the semi-final victory over New Zealand and then again in the final.

Australia came into the contest on the back of a victory over Britain at the World Championships in March, but Wiggins said at the time he would "put my house" on his team claiming gold in Rio - and he was proven right.

Denmark won the bronze medal-race against New Zealand while, earlier in the session, Britain's defending individual sprint champion Jason Kenny progressed to the second round, where he will be joined by team-mate Callum Skinner.

Clancy, 31, now a three-time Olympic gold medallist, said: "This is the best gold of them all. If truth be told we haven't won a fat deal between London and now.

"We had some big downs and crossing the line there has made every single pedal revolution and every training session worthwhile."

Welshman Owain Doull, 23, said: "It's surreal. To pull it off now is unbelievable."

Burke, 28, a two-time Olympic gold medallist, said: "I really wanted to defend the title. It all came together at the right time. We've got the best team ever."

Wiggins celebrated with hugs for BBC Sport pundits Hoy and Sir Steve Redgrave - three Britons who have 21 Olympic medals between them - before performing an impression of British sprint cyclist Philip Hindes and sticking his tongue out during the national anthem on the podium.

Where is Wiggins in a British medal table?

Wiggins' tally of five gold medals is still one fewer than Hoy's six, with the Scot winning all of his on the track, but he draws level with rower Redgrave. 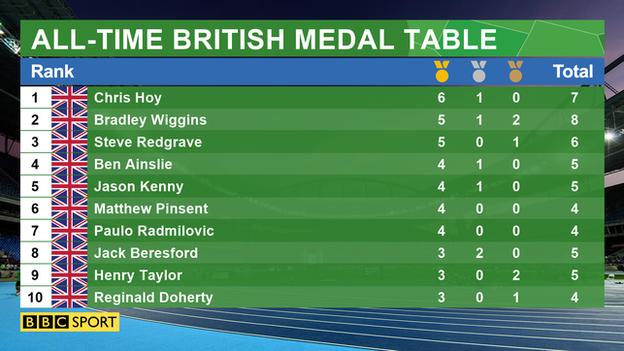 Analysis - 'Wiggins is the greatest British cyclist of all time'

Sir Chris Hoy, six-time Olympic track cycling gold medallist: "Sticking his tongue out during the medal ceremony showed what a release of pressure it was. He's happy, relaxed and loving the moment.

"He's the greatest British cyclist of all time because of what he's done across the board in so many disciplines. Chris Froome has won three Tours de France, which is no mean feat, but Bradley has won road world titles, Tour de France, track titles and set the world hour time record.

"Tonight hasn't really changed that because he was the greatest before tonight."

Sir Steve Redgrave, five-time Olympic rowing gold medallist: "It was fantastic to be here. The atmosphere was very special. I wanted to be here to see the team pursuit win and to see Brad win.

"I admire him so much. For his character - he's very different, fresh and special.

"I am getting annoyed these cyclists are pushing me down the list!"

British Olympic Association chief executive Bill Sweeney: "Amazing, fantastic achievement. Our most decorated Olympian of all time and to do it in that fashion, one of the tightest men's pursuits you are ever likely to see.

"He is a great leader, fantastic athlete. He keeps coming back, the ultimate professional, always staying in shape and he inspires people to come in the sport and do the same."

Wiggins' move to the top of the combined British medal charts comes in the event in which he claimed his first Olympic medal 16 years ago.

Beijing 2008 produced double gold in the individual pursuit and team pursuit and, with 10 world track medals to his name, Wiggins opted to change discipline and prove his skills on the road.

It was a spectacularly successful move, culminating in 2012 when he became Britain's first Tour de France winner and then took Olympic time-trial gold at the London Games 10 days later. He is the only cyclist to win both the Tour and an Olympic gold in the same year.

Wiggins' celebrity was launched in Britain, not only for his superb victories, but for his cool, laid-back demeanour. The trademark sideburns and his penchant for the mod style, made famous by bands such as The Who and The Jam, contributed to "Wiggomania" in the summer of 2012, as did his vibe of working-class boy done good.

His popularity with the British public was reflected by his BBC Sports Personality of the Year victory in 2012 and in the next year he was knighted to become Sir Bradley, although he admitted he felt "a little bit inferior" to others who received the title.

The relationship with Team Sky, with whom he won his Tour title, would become strained as Chris Froome's emergence pushed him to the sidelines, but he won the World Championships time trial title in 2014 before moving back to track racing and breaking the gruelling one-hour record.

Earlier this year he won a second Madison track world title with long-time friend and team-mate Mark Cavendish, before sealing his legacy as one of Britain's greatest ever Olympians by helping GB to team pursuit gold at Rio 2016, claiming the fifth gold of his career.