Great Britain won their first medal of Rio 2016 as Adam Peaty took gold in the men's 100m breaststroke with a world record.

The 21-year-old from Uttoxeter broke his own world mark by winning in 57.13 seconds, well clear of the field.

Peaty is the first British man to win an Olympic swimming gold medal since Adrian Moorhouse, who won the same event in Seoul in 1988.

"It's so surreal to get Team GB's first gold," said Peaty, who finished more than 1.5 seconds clear of his nearest rival.

"I came out tonight and took the first 50 easy and came back with everything I have got. I did it for my country and that means so much for me."

It took five days for Britain to win their first gold at London 2012, but Peaty's medal came on the second day of action in Rio. 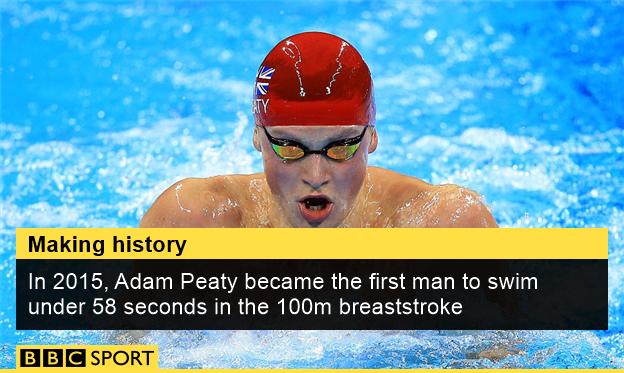 Peaty, making his Olympic debut in Rio, has been dominant from the first moment he got into the pool at the weekend, having first broken his own world record with a time of 57.55secs in the heats.

Moorhouse, who dominated British swimming in the late 1980s, believes Peaty's physical and mental attributes sets him apart from his rivals.

"He is very good at turning threats to opportunities," he said.

"He has the technical ability and talent to do this and can then cope with the pressure of the moment and put a bubble around himself. He has got everything."

"He has had problems with his start but he has worked on it tirelessly and everything came right for him.

"I knew the race was over before it started. Physically he is an absolutely beast.

Sprinter Gemili said that Peaty was "in a class of his own", while long jumper Rutherford said on social media: "The whole of GB tower here in the village erupted when Adam Peaty won. What a brilliant feeling."

"This was more than just Britain's first gold medal of these Rio Olympics, it was one of the finest displays by a British athlete in Olympic history.

"To win over 100m by 1.56 seconds, to leave the last Olympic champion more than a body length behind, is extraordinary even by the exalted standards Adam Peaty has set in his young career.

Who is Adam Peaty?

Peaty still lives with his parents in his hometown of Uttoxeter in Staffordshire and was afraid of water as a child.

The City of Derby swimmer rose to prominence in 2014, taking two golds at the Commonwealth Games in Glasgow. He has also won eight European golds and three world golds.

Shortlisted for the BBC Sports Personality of the Year award in 2014 and 2015, Peaty became the first man to go under 58 seconds in the 100m breaststroke at the world trials last year, setting what was then a world record of 57.92secs.

He has lowered that time by 0.79secs in Rio.

Peaty's grandmother Mavis, or Olympic Nan as she has called herself, is becoming a bit of a star on social media.

Mavis has been following her grandson's exploits in the pool from her home in Staffordshire and has also been showing her enthusiasm on social media.

Since Sunday morning, she has gone from 106 Twitter followers to more than 3,000.

After Peaty qualified for the final, Mavis told BBC Radio 5 live: "Caroline [Adam Peaty's mum] had to phone me because I said: 'I can't get this telly on'. I couldn't get the red button going. Then I thought I know what I can do - my iPad. So I got the BBC up on my iPad and I watched it on there.

"Since I've been going to watch Adam, it's given me a new life, a different life, that I never dreamed of. I've loved every minute of it.."