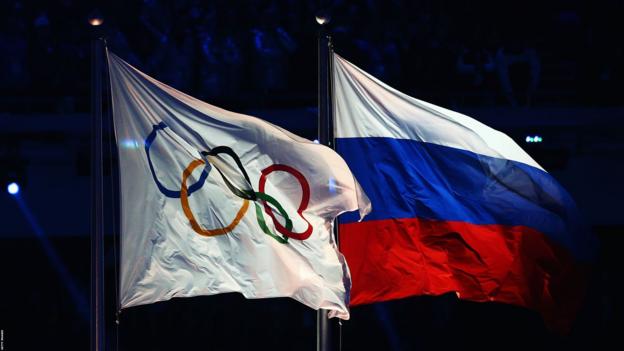 Doping: The International Olympic Committee has supported the "strong stance" taken by the governing body for athletics (IAAF) in upholding Russia's ban from international competition.

The IAAF has decided not to lift the suspension, which was imposed after accusations of state-sponsored doping.

It means Russia's track-and-field team is barred from the Rio Olympics, although athletes can compete independently if they prove they are clean.

Russian President Vladimir Putin has described the ban - imposed in November - as "unjust and unfair".

Hockey: Great Britain manager Andy Halliday will miss the Rio Olympics due to "sensitivities" over his involvement in the operation that led to the death of Jean Charles de Menezes in 2005.

Halliday was part of a police firearms team that mistook the Brazilian national for a terror suspect at Stockwell Tube station in London.

Rowing: There were British gold medals for the women's pair of Helen Glover and Heather Stanning as well as the men's coxless four at the World Cup in Poland, the final major event before the Rio Olympics.

The re-formed partnership of Katherine Grainger and Vicky Thornley were fifth in the women's double scull.

Meanwhile, British Rowing will conduct an internal review into claims of bullying by Paul Thompson, chief coach of the women's rowing team. Thompson has rejected the claims.

Golf: Dustin Johnson earned his first major title by winning the US Open. The American carded a closing 69 at Oakmont to finish four under par, three shots clear of the field.

Hockey: Britain's men missed out on a bronze medal in the Champions Trophy, losing 1-0 to Germany in a third-place play-off in London. Australia beat India in a shootout in the final.

The British women's team are winless after two matches. They must finish in the top two of the six-nation group to reach the final, while third and fourth will battle for bronze.

Judo: Recent European Championship medallists Colin Oates and Natalie Powell are among the seven athletes named in the British judo team for the Rio Olympics. Powell has been selected in preference to London 2012 silver medallist Gemma Gibbons in the women's -78kg category.

Medals: Rio 2016 organisers have unveiled the medals that will be awarded at this summer's Olympics. Each medal weighs 500g, with the silver and bronze medals made from 30% recycled materials.

Rugby Sevens: Spain claimed the final men's spot for Rio 2016 with a surprise victory over Samoa in the Olympic repechage tournament in Monaco. Samoa had won a World Series round in Paris last month but a late Spanish try in the final earned them a dramatic 22-19 victory.

Swimming: The 2008 Olympic silver medallist Keri-anne Payne has been confirmed in the Great Britain squad for the 10km open water event at the Rio Games. Payne, 28, is joined by Jack Burnell, who was fifth at the 2015 World Championships.

Meanwhile, Rafael Nadal has been named in Spain's Olympic team, and could play mixed doubles with French Open champion Garbine Muguruza. Roger Federer and Martina Hingis were both confirmed in the Swiss team.

Athletics: Birmingham hosts the British Championships (24-26 June), where national titles and Rio 2016 qualifying spots are up for grabs.

Hockey: The women's Champions Trophy, the final major international competition ahead of the Olympics, continues in London (18-26 June).

Rugby Sevens: After Spain claimed the final men's qualifying spot for Rio 2016 at the Olympic repechage tournament last week, it is the turn of the women this weekend (25-26 June). Sixteen teams will head to Dublin to battle for the sole spot available for Brazil.

Shooting: The fourth leg of the World Cup for all three shooting disciplines takes place in the Azerbaijan capital, Baku (22-28 June). It's the last global meeting before the Olympics, but none of Britain's six Rio-bound shooters are competing.

Swimming: The US Olympic trials in Omaha (26 June-3 July) will be fascinating - not least to see the form of 22-time Olympic medallist Michael Phelps, who retired after London 2012 but made his comeback two years ago.

Trampoline: The latest round of the World Cup takes place in Arosa, Switzerland (24-25 June).