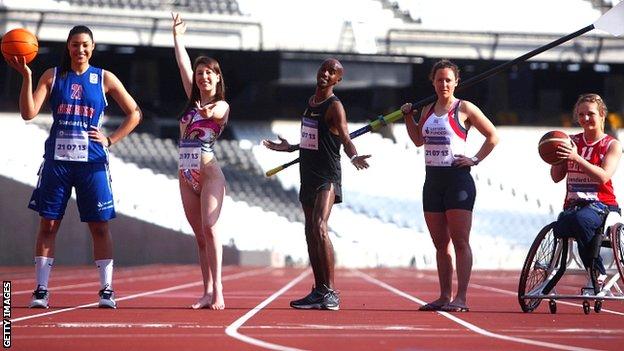 Tennis and football have been warned that part of their public funding is at risk after both sports suffered big drops in participation in England.

Football is now fourth behind athletics and cycling in terms of participation, with swimming the most popular.

There is a continuing slump in the number of young people playing sport... It is clear that policy makers now need to take a much more interventionist approach to try to reverse what is looking like a long-term trend

Sport England claim the figures mean the original boost from the London 2012 Olympics has been maintained.

Sport England intends to hold meetings with both the Lawn Tennis Association (LTA) and Football Association (FA) before deciding in January whether up to 20% of their funding will be suspended.

"We are very disappointed by football's results and the FA really need to grasp this," said Sport England chief executive Jennie Price.

"There is now to be a discussion with the FA and our board, but we operate a payment for results scheme so football are definitely in the at-risk zone."

FA general secretary Alex Horne said his organisation had to work to do.

"Understanding and reversing the fall in participation is an immediate and top priority," he said.

"We are working exhaustively with Sport England and our other partners to ensure the right plans and programmes are in place to achieve this."

Price said the tennis results were also disappointing but felt the LTA was at least attempting to address the issue.

"They did a lot in August and September and had a bit of a lift from that but it was not sustained," she said.

"They need a really good delivery system outside the clubs, such as on the park courts, and they will be getting that message very loud and clear from us.

"I should say they started to engage in the participation agenda and are genuinely focused on it now. We couldn't have said that in the past."

Phil Smith, director of sport for Sport England, added: "I think we've probably finally dispelled the myth that a British guy winning Wimbledon would do something to increase participation figures.

In the year that Andy Murray won Wimbledon, there has been a fall in the number of people who play tennis at least once a week.

Sport England's Active People Survey found that 406,000 people played in the year to October - a fall of 39,000 on the previous 12-month period.

The LTA was tasked with increasing that number to 450,000, and Sport England will now decide in January whether they feel the LTA's long term plans for increasing participation entitle them to receive £10.3m in withheld funding.

"It's not that simple to translate into a weekly habit of ordinary people playing a sport. It takes more than just a Wimbledon winner."

Nick Humby, the LTA's chief operating officer, said: "We are hugely disappointed that the October 2012/13 numbers have gone down, but we take encouragement from the peak between July and September exceeding that of the Olympic and Paralympics last year.

"That was partly due to Andy Murray, partly to the extraordinary weather, and partly to the stuff we are now doing out and about around Britain."

Humby said there were signs of encouragement with the number of people playing monthly holding up, as has the number of women and young people aged under 16 playing the sport.

The LTA will also have a new chief executive, Mike Downey who is coming from Canadian tennis, starting in January.

Sport England's figures, which are compiled twice a year, in April and October, focus on the number of people aged 16 and over playing at least 30 minutes of sport at moderate intensity at least once a week.

However, the picture is not entirely positive, with the report also showing:

Pete Ackerley, the FA's national game senior development manager, told BBC Radio 5 live: "We have been asking our players how they want to consume their football.

"I guess it's the society we are in; they want instant football. They don't want to play as often, and the [Sport England] measurement is four times per month, so that is playing every week.

"What we're finding is that people have got very busy work lives, they have got very busy family lives, and they are fitting in their sport participation differently - and team sports, and in particular football, has been impacted by that."

Price added: "We are concerned about the results for young people. Although the majority of 16-25 year olds still play sport regularly, the numbers are not going up.

"The evidence shows a sharp drop in the popularity of traditional sports, like football and netball, and we need to make sure they have a wider range of sporting activities to choose from."

They were essentially put on probation and given 12 months to meet specific targets, such as raising levels of participation.

Sport England will make its future funding decisions on these six sports in January, when it will also make a decision as to whether up to 20% of football's funding will be suspended.

"I am encouraged that sports participation is back up on the rise compared to six months ago and that participation among disabled people is at an all-time high," said Helen Grant, Minister for Sport.

"More women are getting involved, too, and I want to keep up that momentum.

"But there is still more to be done to encourage greater participation across the board. Sports governing bodies must step up and deliver for the half a billion pounds of public money that they receive.

"If they don't, funding will be taken away and channelled into grassroots sport through other routes."

Clive Efford, Labour's Shadow Minister for Sport, added: "In the year following the 2012 Olympic and Paralympic Games, figures show that overall participation is down. The most damning figure is the reduction in participation among 16-to-25-year-olds by 51,000."

He claimed Prime Minister David Cameron had "no strategic plan for sport" and had "failed to capitalise on the explosion of enthusiasm" generated by the Olympics and Paralympics.

"A golden opportunity is being squandered," added Efford.