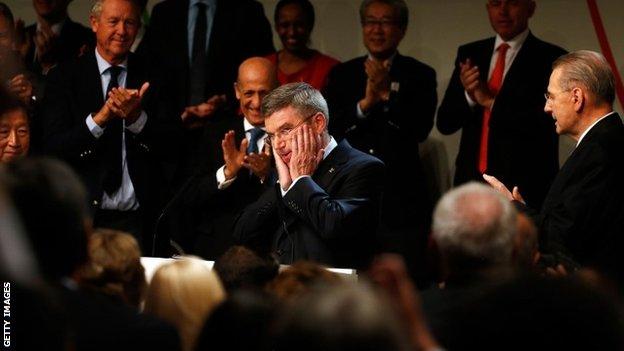 German Thomas Bach has been elected as the new president of the International Olympic Committee.

The 59-year-old lawyer and former fencing gold medallist replaces 71-year-old Jacques Rogge, who is standing down after 12 years in charge.

Bach was the favourite of the six candidates considered for the post in Buenos Aires.

Who is Thomas Bach?

He begins an eight-year term as president, with the possibility of a second, four-year, mandate.

"I'd like to thank all my dear friends and colleagues who voted for me," said Bach, who is the ninth president in the IOC's 119-year history. "This is an overwhelming sign of trust and confidence.

"I know of the great responsibility of being IOC president. This makes me humble.

"I want to lead according to my motto: 'unity in diversity'. This means I will do my very best to balance all the different interests of stakeholders of the Olympic movement."

"Thomas Bach may not be a household name, but he has just become the most powerful figure in world sport. An IOC veteran, the former Olympic fencing champion offers continuity after 12 years of largely successful Jacques Rogge rule. Bach inherits an Olympic movement in rude financial health. But challenges await. Preparations for the Games in Sochi and Rio have been beset by difficulties, there has been a spate of recent high-profile doping cases, and many want reform of the way sports are chosen for inclusion. Bach has said he wants to curb the cost of bidding for and staging Games, and has talked about establishing an Olympic TV network."

"Thomas is a long-time advocate of the Paralympic movement and we look forward to working with him to further develop our relationship in the coming years," he said.

Boxing chief Wu was eliminated after the first round, leaving five contenders in the final round of voting.

Prior to the vote, Bach said his first priority if elected would be to ensure the smooth delivery of the Sochi 2014 Winter Games, which have been subject to delays, budget overruns and concerns over the warm weather.