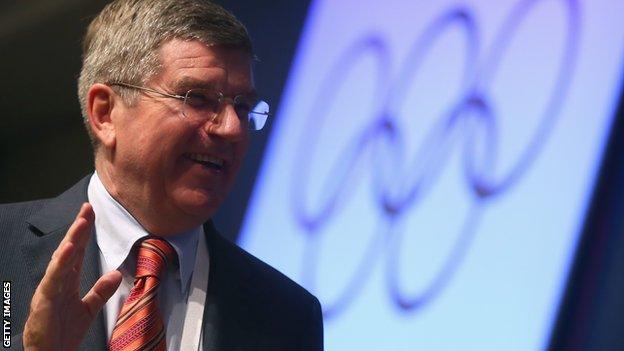 The Rio 2016 Olympics could be targeted by mass demonstrations unless the International Olympic Committee starts explaining the benefits of the Games to the Brazilian public, according to the front-runner to become the new head of the Olympic movement.

Thomas Bach, a 59-year-old German lawyer and former fencing gold medallist, is favourite in a six-way contest to replace Jacques Rogge as president of the IOC.

Rogge is stepping down after 12 years in charge following the election at the 125th IOC session in Buenos Aires on Tuesday.

"We should be confident enough to enter into a dialogue with the people who are concerned about social issues in Brazil."

If elected, Bach says his first priority will be to ensure the smooth delivery of the Sochi 2014 Winter Games, which have been subject to delays, budget overruns and concerns over the warm weather.

But he is also anxious about the potential for a public backlash against the Rio Olympics two years later.

Hundreds of thousands of protesters took to the streets in cities across Brazil during June's World Cup rehearsal, the Confederations Cup.

Although football was not the specific target of the demonstrations, activists expressed anger at the huge cost of staging the World Cup next summer.

With fears growing over Rio's ability to juggle preparations for the World Cup and the 2016 Olympics, Bach told the BBC the IOC needs to act urgently or risk facing similar protests.

He said: "After what we have seen during the Confederations Cup, we have to communicate very intensively the advantages of the Olympic Games for the society in Rio de Janeiro.

"We need to show that with the Olympic Village you get more affordable housing, to tell the people how their traffic infrastructure will be improved.

"We should not hide all this, we should be confident enough to enter into a dialogue with the people who are concerned about social issues in Brazil.

"You can't stop protests. It's a democratic society and you will never have 100% supporters for a plan. But by entering into a dialogue and by communicating you can see how you can convince people."

Tokyo became the latest city to be awarded the Games when it beat Istanbul and Madrid in the race for the 2020 Summer Olympics on Saturday.

But at a time when many critics are questioning the costs of staging huge sports events, Bach has called for the bidding process to be reformed.

He said: "We could take a different approach by saying to candidates, 'How do you imagine sustainable Olympic Games in your city?', 'How does it fit with your development plan - with regards to transport, infrastructure and social issues?'

"Then you get a concept that really fits with the respective society and culture and not like now with bid books which are all the same and written by the same people."

Bach's experience as a gold medal-winning athlete, lawyer and businessman have made him the standout candidate in an election which also includes:

But while Bach is widely respected in IOC circles and seen as the most qualified candidate, he is not universally popular.

He has also been facing some difficult questions at home in Germany, where he is president of the German Olympic Committee.

Last week, a German TV investigation alleged his campaign was being backed by Sheikh Ahmed Al-Fahad Al-Sabah, a member of the Kuwaiti royal family and an incredibly influential Olympic powerbroker.

Sheikh Al-Sabah is head of the Olympic Council of Asia and President of the Association of National Olympic Committees and the German TV programme claimed he told them: "I am with Dr Bach to be the next IOC president… I do all things we can to help him."

"There is no doubt Jacques Rogge is handing over an Olympic movement in far better shape now than when he became International Olympic Committee (IOC) president 12 years ago."

Bach has also been under pressure over a far-reaching inquiry into state-sponsored doping in West Germany during the 1970s - a period when he was competing as an athlete.

Even though the German Olympic Committee initiated the study and he was not named in the report, Bach was forced to deny claims it could hurt his election chances.

Following the report's publication, Bach said: "My IOC colleagues know I initiated the study. They've known my zero tolerance policy on doping issues for decades. That's why I fear no consequences for the election."

Speaking to the BBC before the news of the doping report broke, Bach made it clear that, if elected, the fight against doping would be central to his presidency - especially after the positive drugs tests involving big-name athletes such as Tyson Gay and Asafa Powell.

He said: "It is very disappointing to see these high-level athletes still trying to cheat.

"On the other side, you see the anti-doping system is working and we are able to catch the cheats.

"We have to take it in a realistic way. This fight against doping will never be won. Whenever you have human beings in competition against one another, be it in sport or other areas, you will have some who try to cheat.

"This is the real poison of a positive test. It's not about the cheat you catch. The poison is with this positive test you create suspicion on the clean athletes.

"There is no time for complacency. Every day you have to look at how it can be improved to ensure the credibility of the sports."