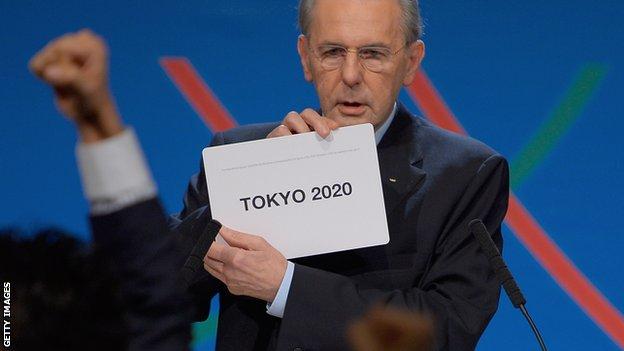 In the end it was a comfortable win - Tokyo beating Istanbul 60-36. In fact Tokyo were so far out in front they almost won in the first round.

It was all very different four years ago. Then Tokyo polled just 20 votes as they went out in the second round of the race for 2016 - a contest won by Rio de Janeiro.

Here in Buenos Aires they showed they had learned the key lesson from that campaign - that presenting a sound and safe technical bid wouldn't be enough. They also had to inspire.

Their slick presentation on Saturday did just that, emphasising the economic and political strengths [not enjoyed by their rivals Madrid and Istanbul] but at the same time setting out an ambitious and exciting vision for the 2020 Games.

Although the presence of Princess Hisako charmed the members of the International Olympic Committee, Japanese Prime Minister Shinzo Abe was the star turn.

His speech to the members tackled head on the one issue which could still harm Tokyo's bid - the potential for further leaks from the crippled nuclear power plant at Fukushima.

His emphatic declaration that the situation was under control clearly settled any last-minute nerves among the IOC.

So what else helped swing the vote Tokyo's way?

There is no doubt that after all the problems the IOC has been experiencing in Sochi and Rio, they were looking for a safe pair of hands. Tokyo's bid was ranked number one in the technical assessment carried out by the IOC evaluation commission in June.

Add to that the commercial allure of Japan's well-established sports and media market and it's easy to see why they were such a popular choice.

There was also a feeling that this was Asia's turn. By the time the Games come to Tokyo it will have been 12 years since the Beijing Olympics.

The support of the influential Sheikh Ahmad Al-Fahad Al-Sabah, a member of the Kuwaiti Royal Family, also helped. An IOC member since 1992, he is chairman of the powerful Association of National Olympic Committees and the Olympic council of Asia.

His influence in the IOC is said to be growing all the time - his support is thought to be one of the main reasons why the German Thomas Bach is favourite to become the new IOC president next Tuesday.

And he made a very public appearance at the Tokyo 2020 victory party at the Sheraton Hotel in Buenos Aires, hugging senior members of the bid team and posing with them for pictures.

It is hard to know just how significant the Sheikh's support for Tokyo was. But as one trained IOC observer said, "it's much better to have him on your team working for you than on the outside working against you."

Tokyo was also helped by Madrid's failure to convince the IOC that the Spanish economy was ready for the demands of staging the Olympics. They were unable to escape from the shadow of the Eurozone crisis which has left Spain with huge debts.

By slashing the budget for the Games to under $2billion they were doing the right thing by the Spanish people, but they were limiting their ability to excite the IOC.

Madrid were also hampered by the fact that some major European cities are lining up for Olympic bids in 2024 - in particular Paris and Rome. A number of European IOC members wanted to avoid ruining their chances by electing Madrid now.

As for Istanbul, for so long the front runner, they couldn't recover from the damage caused by the recent street protests and doping scandals.

Turkey's appeal was that it could unite two continents - Europe and Asia. They failed to win enough support in either.