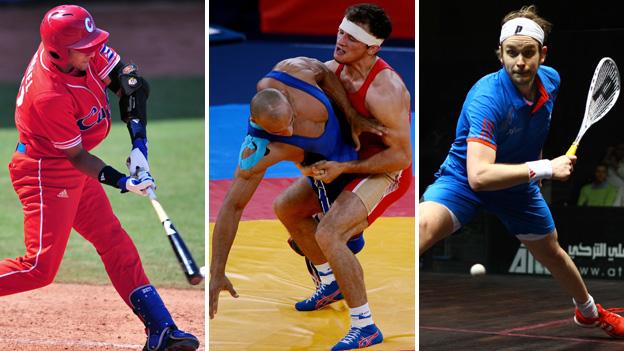 Wrestling and the Olympics go way back. Running, jumping, throwing, grappling: they are time-honoured ways of settling who is faster, higher or stronger.

But when the delegation from the International Federation of Associated Wrestling Styles (Fila) goes before the International Olympic Committee's (IOC) 125th session in Buenos Aires on Sunday, a 1,000-year relationship is on the line.

Those five warriors will spend 20 minutes explaining why their sport is synonymous with the Olympics, and then 10 minutes answering questions like, "How did you get in this pickle, then?"

When the three men and two women from Fila have finished, the 103 assorted royals, sporting greats and administrative elite who make up the IOC membership will pick up their voting gizmos and choose which one of baseball/softball, squash and wrestling they want to invite to their 2020 Olympics party.

IOC members are infamously difficult to read, but they like their traditions, which is why they will probably shatter the hopes of the baseball/softball and squash camps, and reprieve wrestling.

For the joint bid from baseball/softball, this will be confirmation of their 2005 rejection when they became the first sports to be chopped from the menu since polo got the mallet in 1936.

A "no" vote will hurt, but it should not come as a great surprise when you consider the fact that baseball cannot persuade Major League Baseball to down tools so the sport's best athletes can go to the Games, and the lingering suspicion that they are All-American games, not suited to a global celebration of sport.

Squash, though, will be crushed.

Now played in every corner of the world, the sport has spent the last decade trying to get past the IOC's bouncers.

Having failed to convert widespread goodwill into votes in 2005 and 2009, the World Squash Federation called in a crack squad of schmoozers for this campaign, Vero Communications, the spin doctors who got rugby sevens on the programme and sold the idea of a World Cup in the desert.

Theirs has been a concerted effort, based on strong arguments that squash is the only sport on the ballot that would be new to the Olympics, has made huge improvements as a spectacle and brings its own pop-up venue with it. Compelling stuff, but it is unlikely to be enough.

As veteran Olympic watcher Ed Hula, founder of the Around The Rings website, told me: "Wrestling can play the history card, and conservative IOC members will most likely feel it should be part of the Games."

"Wrestling will get in easily," was the blunter prediction of Duncan Mackay, the British journalist behind the insidethegames website.

The reason for his certainty can be traced back to the original decision to send wrestling to the "discontinued sport" box with croquet, lacrosse and tug of war.

Going into this February's meeting of the IOC's executive board, it looked as if it would be a straight fight between the two sports at the bottom of their league table of bums on seats, TV viewers and other measurable charms, modern pentathlon and taekwondo.

But taekwondo dodged this kick to the head pretty easily, as did canoeing. They were saved in the first two rounds of voting, leaving hockey up against the only sport invented for the Olympics, modern pentathlon, and wrestling, one of the original events back in 776 BC.

Wrestling should have been fine, provided it had been paying attention. Sadly, it had not.

The incorrectly filled-in evaluation form did not help, neither did the fact it discriminated against female athletes by giving them fewer medal opportunities.

Another sign of sloppiness was the fact its rules had not changed much in 3,000 years, and were by now a mystery to the majority of those who make up a modern Olympic audience.

So no, wrestling wasn't fine. It had got complacent and inward-looking, and now it was out.

Just how bad things had got became apparent in the moments shortly after the vote when the unfailingly polite IOC president Jacques Rogge seemed unable to remember the name of Fila's president, despite their offices being a few miles apart on the shore of Lake Geneva.

"The Olympics is the pinnacle of our sport. We have no Wimbledon or World Cup," Colin Nicholson, the chief executive of British Wrestling, said when asked what losing the vote meant to his sport.

"We were losing our pinnacle: our entire talent pathway would disappear. It was pretty dire."

Wrestling might be small beer in Britain, but it is massive in Asia, big in east Europe, and huge in US schools and colleges. It is no novelty act in its traditional strongholds.

But take away its Olympic status and it loses its share of the IOC's broadcasting profits (£334m at London 2012), not to mention funding available from national governments.

"It was a very big shock," recalls Bob Condron, a former United States Olympic Committee spokesman who came out of retirement to help Fila fight for survival.

"But there was no point in lashing out, guys sending their medals back and sending hate-mail to the IOC - we had to get back off the mat and convince people we were an asset to the Olympic Games."

The fight-back started immediately. Fila's invisible president Raphael Martinetti, the Swiss neighbour Rogge could not recall, resigned and Nenad Lalovic, an impossible-to-miss Serbian with a sharp mind and ready charm, took over.

Within three months, wrestling started to look like a sport with a future again.

A no-holds-barred meeting in Moscow in May resulted in three voter-friendly reforms: the 14-4 male/female medal split would become 12-6, with two new weight classes introduced for women in freestyle wrestling; the sport's governance was revamped with new athletes' and women's commissions, and a guarantee that at least one of Fila's four vice-presidents would be a woman; and more exciting action would be encouraged by giving extra points for takedowns.

While Lalovic dragged wrestling's rules and rule-makers into the 21st century, the sport's superpowers got busy. Baseball/softball and squash have their backers, but they haven't got cheerleaders with pompoms as big as Russian president Vladimir Putin, the host of the next Olympics, the Winter Games in 2014.

What all this adds up to is the unavoidable conclusion that this process was less to do with introducing another new sport (golf and rugby sevens have already ticked that box), and more about administering a loud slap to a slumbering sport already on the programme.

"The federation was dead in the water, with old leadership that was resistant to change," said one seasoned Olympic consultant who asked to remain anonymous.

"But exclusion could be the best thing to ever happen to wrestling."

It is a point picked up by Fila's PR fireman Condron: "We've listened and learned. We're a healthy sport again."

This is great news for wrestling, of course, but no comfort to those on the outside looking in.

All is not lost, though, because as well as voting on a "new" sport in Buenos Aires, the IOC is also picking a host city for 2020, and perhaps most significantly of all, a new president.

Rogge has put in a fine 12-year shift, and nobody is in the mood to start tearing up his legacy just yet, or even hint at criticism of his belief that the Games should be capped at 28 sports.

But baseball/softball, squash, T20 cricket, karate, tiddlywinks and any other pastime with an eye on Olympic status might want to think about a big push at becoming number 29 sometime next year.