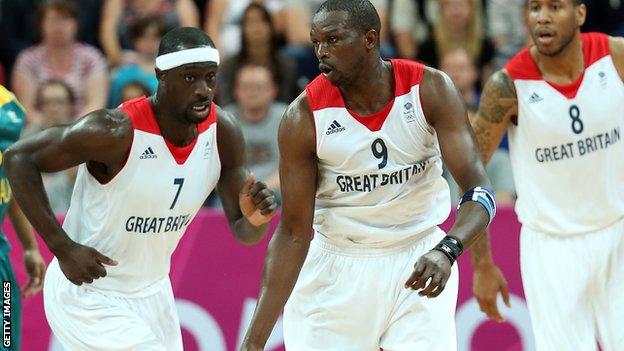 British Basketball has been awarded £7m by UK Sport after appealing against a decision to cut its funding.

The sport was initially told it would receive no money in the build-up to Rio 2016, but won a reprieve in January.

"There was disbelief when GB Basketball learnt in December that after receiving £8.6m worth of investment for London 2012 they would now have no support leading to Rio 2016.

"Whilst the sport was confident they could earn a reprieve, a conditional figure of around £7m is probably more than they could have hoped for and proves the lobbying power of NBA star Luol Deng who personally wrote to Prime Minister David Cameron demanding action.

"To know UK Sport had such considerable resources remaining to invest will be a blow to those who have missed out on earning any form of support."

Wheelchair fencing has also been awarded funding from the body for an initial 12 months.

UK Sport say the sports must fulfil "strict performance criteria" for money in the following three years, while beach volleyball gets an increase.

Wheelchair fencing, which like basketball saw its funding reduced to zero, has been awarded just over £1m, while women's beach volleyball has had its funding increased from £386,753 to £514,000.

UK Sport said the three sports had presented "new and compelling evidence to demonstrate their case for revised funding for the Rio cycle".

They added that the awards for basketball and wheelchair fencing would be "on a one-year conditional basis with the following three years' funding released only on the fulfilment of strict performance criteria".

UK Sport also added that "it has not received any formal appeals to Sport Resolutions UK on its Rio cycle investments" from handball, table tennis, wrestling and volleyball (sitting, men's beach and indoor), which will not receive support for Rio 2016.