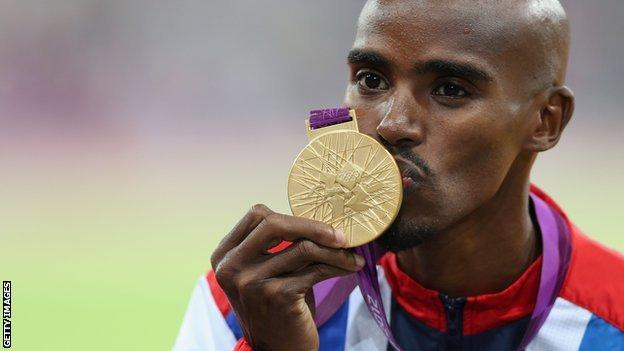 Split into two groups, the eight men and eight women will compete in eight different disciplines.

Gabby Logan hosts the relaunch of the classic 1970s show.

"We have an incredible line-up of Olympic heroes," said Logan, whose father, former professional footballer Terry Yorath, appeared on the original Superstars.

"What an opportunity for them to compete against each other across a range of diverse physical challenges."

The eight disciplines include 100m and 800m on the track, a javelin competition, a 50m race in the swimming pool and an archery event.

The contestants will also tackle a kayak race and use their cycling skills in a hill climb before a grand finale of gruelling gym tests.

Former Olympians Denise Lewis and Iwan Thomas will provide their views as pundits, while London 2012 bronze medallist Rebecca Adlington will act as a mentor to all the athletes in the swimming event.

Speaking before the event took place, Farah, the 5,000m and 10,000m Olympic gold medallist, said he was thrilled to be taking part in the one-off show, which was staged at the University of Bath.

"Superstars is going to be a lot of fun," he said. "I'm really looking forward to it.

"After a hard season, it will be nice to compete in a different environment. Some of the events are quite new to me which will make it all the more interesting."

Triathlon brothers Alistair and Jonathan Brownlee, who took gold and bronze respectively at London 2012, will again be fighting for family bragging rights.

"Let's see if we can repeat our London 2012 achievements and get two Brownlee brothers on the Superstars podium," said Alistair.