Two of Britain's greatest cyclists finished their stellar Olympic careers on Tuesday as the host nation grabbed more medals on the final day at the London Velodrome.

Sir Chris Hoy surpassed Sir Steve Redgrave as Britain's most successful Olympian after adding keirin gold to his team sprint success, giving him six golds and a silver in total.

Victoria Pendleton got silver in the individual sprint in the last race of her career, having won keirin gold last week to add to her sprint triumph in Beijing in 2008.

At the end of a great week for British track cycling, Geraint Thomas, who won gold in the team pursuit at London 2012, gives his verdict on his fellow Team GB cyclists' glittering careers.

And fellow Olympic gold medallist and BBC Sport analyst Chris Boardman, who worked with the duo in his role as British Cycling's head of research and development (aka 'The Secret Squirrel club'), discusses the legacy they will leave behind.

WHY ARE THEY SO GOOD?

Boardman: "With Vicky it is down to her tenacity. She takes everything very personally, every result, everything.

"She puts herself through the mill and just doesn't stop. She has the courage to keep going even in the face of massive disappointments.

"How would I sum up what she has achieved in her career? A lot! To be a multiple World and Olympic champion and to be so consistent at the top of her sport is such an achievement. She is going to leave a big hole behind her. 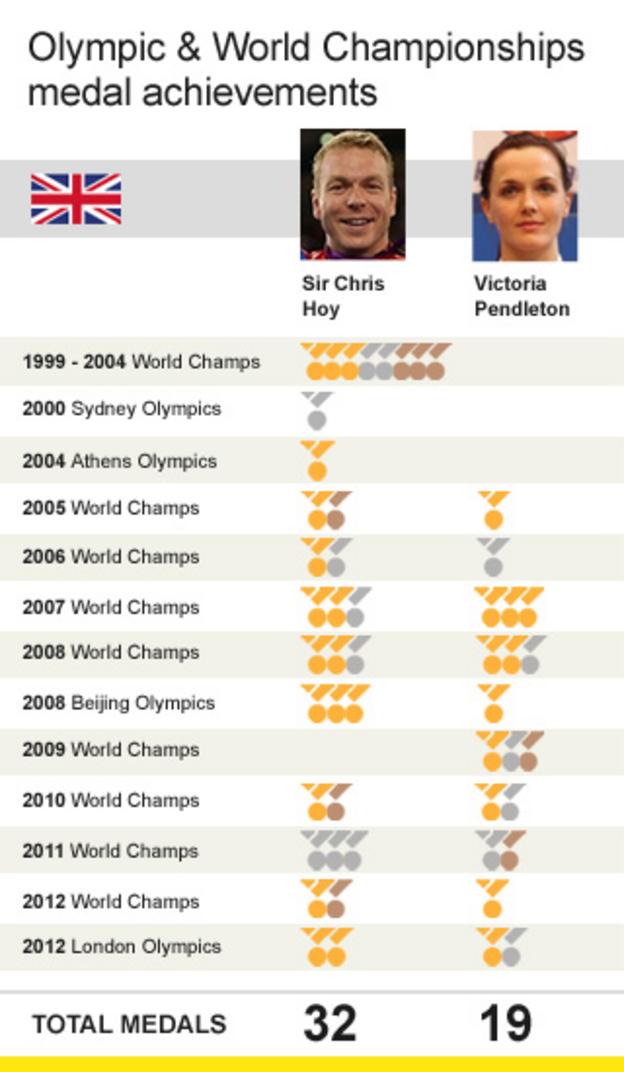 "This is not a slight on her team sprint partner Jess Varnish at all, but there is a gap there and it has not been closed so they are really going to have to go some to fill those particular shoes.

"But Vicky also struggled a bit in the early years of her career. She was very up and down and it took her a long time to make a breakthrough, so I think that is a good sign for Jess, who is only 21."

Thomas: "For Chris it is about his work ethic and how much he really wants to win. You need hunger and discipline to be able to go and train like he does day in, day out for years and years. It is incredible to see.

"The 1km time trial was his original event. He went to the 2004 Olympics and won that under a lot of pressure. Then, when it was taken out of the Games he changed discipline, learning about the sprint and the tactics, and making himself the best in the world.

"As sprinters, he and Vicky have that one discipline that they need to work on for so long and it involves a lot of training and not much racing.

"They have the world championship every year and the Olympics every four, but they spend most of their time training on the track or in the gym and it can get quite monotonous at times, compared to pursuit training where you go on the roads too.

"That's another reason why it is amazing for them to have achieved what they have done, with all their world titles too, over so many years."

Boardman: "I came on board with British Cycling at the Athens Olympics (2004) when I was working a little bit with Bradley Wiggins.

"When I saw Vicky there, she was always emotional - but then she always was all the way through - with big ups and downs. And it was unsure at that stage which way her career was going to go. The next eight years panned out quite well, considering!

"I know Vicky is stopping after this, Chris we don't know, but he has been dominant for so long now. They have had incredible careers and have done so much for the sport of cycling, they have been great ambassadors for British cycling and British sportspeople and they are great patrons for the London Games."

"I had watched Chris for a long time before 2004 because our careers actually overlapped - he has been going that long.

"I can remember Chris telling a story about being at a track in Leicester, back in around 1992, when I was riding round.

"He said 'quick quick', jumped on the track to ride behind me and went past his mum putting his thumbs up to get a photograph. How the tables have turned - I want to get my picture taken with him now."

Boardman: "Sir Chris and Vicky got David Brailsford's [GB Cycling team performance director] grand plan off the ground and helped keep it going. They are the two people who have played it out from the start.

"It needed them to go through and win to give everybody credibility and they have been an integral part of it - in the planning and the execution too."

Thomas: "They have put British cycling on the map. You can have best coaches, best staff and best structure in the world but if you don't have the athletes then you have got nothing.

"What they have done and the journey they have taken has set us up nicely. I am so privileged to be the right age to be a part of it and benefit from the system that is in place now."

AN INSPIRATION TO OTHERS

"Jess Varnish is now in a similar place to where Pendleton was coming up towards Athens, so it could go either way.

"She will be following in Vicky's footsteps, so she's carrying a lot of responsibilities, but Pendleton has shown her what can be done.

"I am a great believer of the adage that success breeds success. Chris and Vicky set a benchmark that showed everybody else it was possible.

"The people training with them had literally a gold medal yardstick right next to them all the time and that makes a massive difference when you can keep measuring yourself against the best - you can see it in the triathlon with the Brownlee brothers, Alistair and Jonny [who won gold and bronze respectively on Tuesday].

"It's not a coincidence that they are the world's one and two, they train with each other all the time.

"And Britain's swimmers should take note from that because at the moment they train in different centres all around the country. It's not nice to train together, because it is uncomfortable to constantly be challenged, but it keeps the standard absolutely at the top.

Thomas: "For me as a young rider, it was always a massive boost to see them do so well. I have looked up to Chris since I was a kid, so to be training alongside him is definitely a boost.

"Working alongside them always gives you a little bit extra."

Boardman: "It is the end of an era for them, but not for British Cycling because there is clearly some talent emerging behind them.

"But where does it go next? I don't know and that is quite exciting really to not know what is going to happen. I'm just thankful to have been involved in this era."

Thomas: "The system is in place with the British Cycling Academy now so the sport is being looked after from grass roots upwards.

"You can see young riders coming through all the time and I think young guys are just being inspired by them as well. When I was a young kid and watching the road racing, it was always just foreigners that were good and it always seemed a million miles away.

"But when you see Bradley Wiggins doing well in the Tour de France, it makes it all bit more do-able.

"Hopefully, a similar kind of thing can come out of the Olympics. Not just cycling, but with sport in general, inspiring kids to believe they can actually do what see their heroes do on TV."