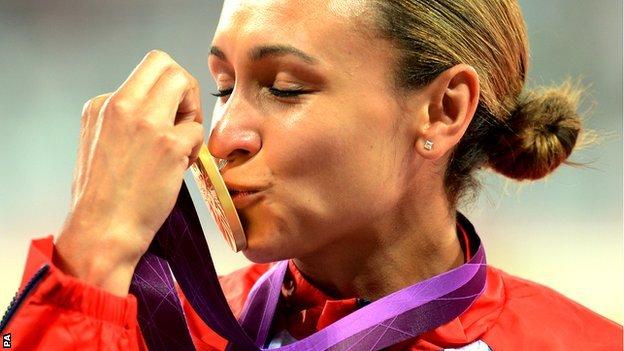 It ended with the nation enjoying its best ever athletics session at a summer Games as three gold medals came in the space of just an hour.

Sandwiched in between, there was another track cycling success to savour, as the women's team pursuit took gold in the London Velodrome with another world record.

Britain took their tally of gold medals at London 2012 to 14, tightening their grip on third place in the table, with only the United States and China above them.

Here, BBC Sport rounds up some of the best reaction and analysis from an amazing day for British sport.

What they said about Mo Farah

Michael Johnson, four-time Olympic champion: "Mo went in with a race plan. He showed great enthusiasm and guts. I am really pleased for him because he had a lot of expectation on his shoulders. He was expected to win and he came through."

What they said about Jessica Ennis

Michael Johnson, four-time Olympic champion: "This is a phenomenal performance. After suffering the disappointment of missing Beijing through injury, she then comes back at a home Olympics to prove to everyone that she is the best. Not only that but that she can perform under incredible pressure and win gold. I am truly happy for her."

Denise Lewis, former Olympic heptathlon champion: "It's hard to find the words. We have witnessed greatness, we have witnessed someone who had a dream come and deliver on the world stage. People love her, they really do. She is one of the most-loved athletes around. I am honoured to have witnessed this."

What they said on Greg Rutherford

Darren Campbell, double Olympic medallist: "It is immense. He is so talented but he hasn't had that bit of luck to get onto the podium in a major championship before. This time he has had that little bit and now he is the Olympic champion. Greg Rutherford, take a bow."

What they said on lightweight double sculls

James Cracknell, two-time Olympic champion: "You beauties! This is fantastic, not just for Team GB but for the two women involved. They have over-performed and over-delivered. Good on you, girls."

What they said on women's team pursuit

Chris Boardman, Olympic gold medallist: "If they go any faster, they are going to need parachutes to slow down! To break a world record again after such a short gap between all the rounds is just incredible. What a fantastic experience. Tears all around because they've worked so hard for this. They've been so, so strong."

Rob Hayles, Olympic silver medallist: "That's six team pursuits by these girls and six world records. I don't know any other sport or any other team where that is the case. The sheer dominance is incredible, it must be unprecedented. Off the back of Beijing, people were saying this wasn't going to happen. They are proving people wrong."

What they said on men's four

Sir Steve Redgrave, five-time Olympic champion: "They were smooth and powerful and all the elements came together. It was close all the way down. The Aussies had to do something in the middle but they didn't make anything up. They didn't make any impact and it was a fantastic race by the GB men's four."

James Cracknell, two-time Olympic champion: "That was brilliant because the team never had a clear-cut margin. The Australians were always there, snapping and biting away at them like a little terrier but that was a stonking performance. They have had to withstand pressure from the Aussies all season, not just in this race, and they have dealt with it."

Daley Thompson: "What a night, Team GB awesome. We have to have an Olympics every year! This makes £9bn look cheap and unbelievably good value."

Rio Ferdinand: "Has British athletics ever seen a better night than this? I doubt it very much. Rutherford take a bow fella, huge from ya!"

Sir Clive Woodward: "Had some amazing days in sport, today was very special, very proud of British athletes, proud to live in this country, totally brilliant."

Gary Lineker: "I can honestly say that was the best day's sport I've ever seen! Above and beyond anything we could have hoped for #Olympicheroes"

Mark Cavendish: "I don't normally stand up off the sofa for much other than cycling, but I did just that while watching @J_Ennis bring home heptathlon Gold!"