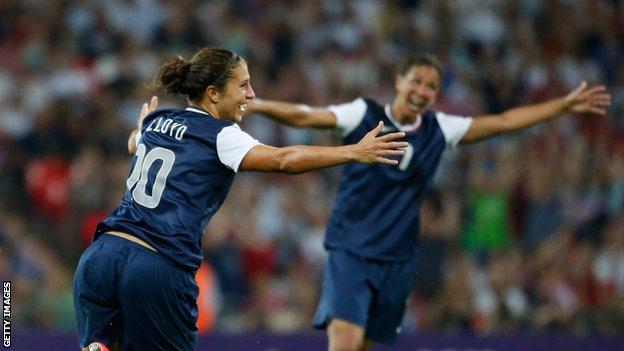 The USA beat Japan 2-1 at Wembley to avenge their 2011 World Cup final defeat and claim their fourth Olympic gold in women's football.

Carli Lloyd scored both goals for the US, an early header and a powerful strike after the break.

Yuki Ogimi scored to reduce the deficit for Japan, who hit the opposition woodwork twice and their own once.

Japan had a chance to equalise late in the game but Hope Solo made an excellent save to deny Mana Iwabuchi.

"The final has reflected the whole women's tournament. It was a great game won by a great goal. Japan played their part and came back into it, but the USA were just too strong."

Despite being outclassed for large periods of the game, they showed a resilience and determination that their coach Pia Sundhage described earlier this week as "unique".

The match was played in front of 80,203, a record crowd for a women's Olympic football fixture.

And the near full house at Wembley was served up a treat as two teams of contrasting styles produced a relatively open final brimming with passion and skill.

Perhaps the pain of last year's World Cup defeat in Germany was still on the minds of the US players as they bossed the opening seven minutes before Lloyd's header - taken off the boot of Abby Wambach as the striker attempted to volley Alex Morgan's cross - gave them the lead.

Coach Sundhage leapt joyously into the air but she soon came back to earth as Japan, diminutive maybe but swift in mind and fleet of foot, soon took control.

Their crisp and accurate passing soon started to slice open the US defence. Solo saved from Nahomi Kawasumi before athletically tipping a header from Ogimi onto the crossbar.

The American keeper was then fortunate to see a shot from Aya Miyama hit the woodwork and rebound safely away from her goal.

Shinobu Ohno then went very close with a curling effort from 18 yards as Solo's goal started to lead a charmed life.

The Japanese were unlucky not to be awarded a penalty when Tobin Heath handled Miyama's shot, but the Asian side were also fortunate not to fall further behind when Azusa Iwashimizu, under very little pressure, headed against her own post.

Japan's failure to convert their opportunities was punished eight minutes after the restart when Lloyd was afforded the time and space to shoot from 20 yards, burying her ferocious strike into the corner of the net.

But they refused to give up or compromise on their passing principles and they were rewarded when Ogimi tapped home moments after skipper Christie Rampone had made a goal-line clearance.

Amy Le Peilbet also cleared off the line as Japan continued to press forward and Solo was called into action to deny substitute Iwabuchi with eight minutes of normal time remaining.

USA coach Pia Sundhage paid tribute to Japan after the final, claiming: "We started the game in a good way and got a goal but after that we were way too conservative in the way we defended and attacked.

"A lot of credit must go to Japan, the way they played, kept possession and their good technique forced us to change our game plan.

"I think that many of us coaches should watch Japan and learn from the way they keep possession and look dangerous."

But she felt the US team would continue to improve as they build towards the next World Cup in 2015.

"There are some many other good teams right now, and it has not always been like that," said the Swede.

"I can imagine four years from now it will be entertaining and exciting and the technique of the players will make magic stuff happen.

"But by the 2015 World Cup I think that we might be unstoppable. There are so many young players coming through."

"I believe the game is changing and developing," he said. "It is not only about skill and the physical side but also about defence and organisation."