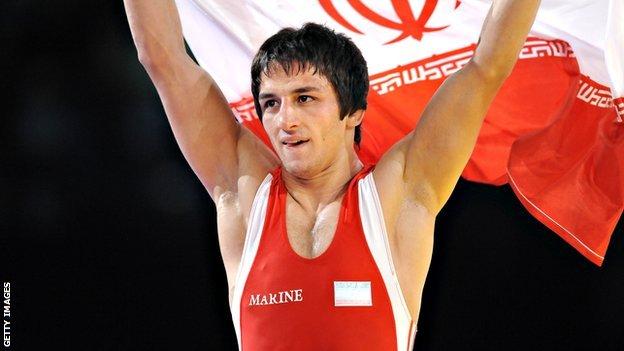 In front of a packed ExCel Arena Soryan used his experience and additional weight to dominate from the start.

He claimed the first round with an expertly executed gut wrench throw, then capitalised on a Bayramov error in the second for the decisive score.

"That's Iran's first ever gold medal in Greco wrestling. He will be a hero back home, and doesn't he deserve it? He's battered and bruised from years of fighting and years of dieting to make the weight, but it's worth it in the end."

Bayramov, 25, won the silver medal in the 55kg weight division in Beijing four years ago and again had to settle for second place.

In truth he was always on the back foot, and was occasionally halted and warned by the referee for bending Soryan's fingers.

Soryan, at 26 already a five-time world champion, displayed his dangerous skill by spinning Bayramov onto his left side in the highlight move of the final, claiming a clear two points.

And when Bayramov attempted an audacious standing throw in the second round, Soryan dodged the move and leapt onto his opponent's back to pin him to the ground and seal the point and the Olympic gold.

As in all wrestling, two bronze medals were awarded, and they went to Peter Modos of Hungary and Mingiyan Semenov of Russia.