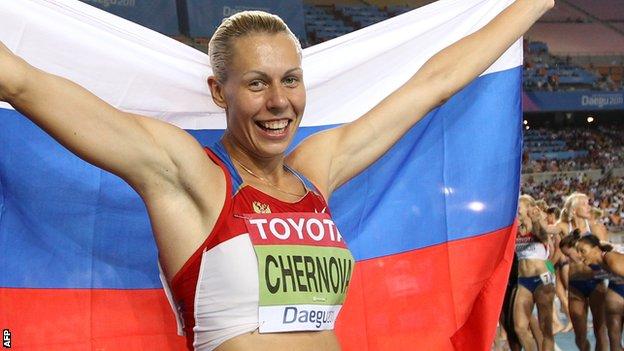 A former world junior champion, Chernova was promoted to Olympic bronze medallist in 2008 when Lyudmila Blonska failed a drug test.

She travelled to the 2007 World Championships in buoyant mood after posting a junior record score, but suffered a torn hamstring in Osaka and had to withdraw after four events. She failed to impress at the major championships in 2009 and 2010.

She still lives with her parents in the southern Russian city of Krasnodar. Her father, Sergey, is one of her coaches; her mother, Lyudmila, won Olympic gold in the 4x400m relay in 1980 and is Minister of Sport for the local region.

Chernova was given an apartment by the regional government after winning bronze at the 2008 Olympics, but she only uses it for storage.