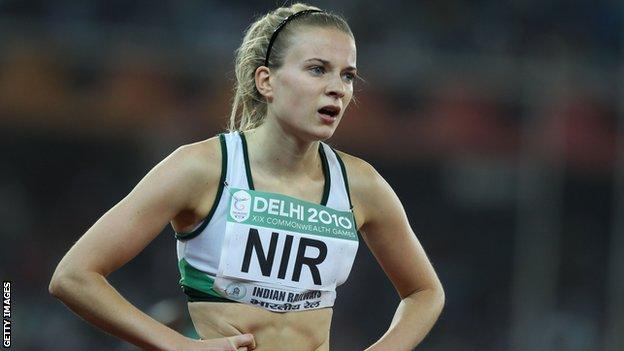 Joanna Mills exited from the World Junior Championships after a disappointing run in her 400m semi-final in Barcelona.

The Ballynure athlete finished eighth in her semi-final in 54.52 seconds.

A place in the final was never in prospect but Mills would have been aiming to better her Wednesday heat time of 54.17.

However, her performances may have proved enough to confirm her place in Ireland's Olympic 4x400m relay squad.

Mills was omitted from Ireland's original Olympic 4x400m selection last week but then won an appeal.

Catriona Cuddihy, who was dropped from the squad as a result of Mills' appeal, has launched a counter appeal and a final verdict on the issue is expected before the end of this week.

Mills went into the World Juniors .18secs faster on the clock than Cuddihy this season.

The Ballymena & Antrim athlete's performance in the Olympic Stadium on Wednesday stretched her season's best advantage over the Kilkenny runner to .42secs and her time on Thursday was still quicker than Cuddihy's personal best (54.59).

Mills was fourth in the individual 400m final at last year's European Junior Championships and has a personal best of 53.89 set at that event in Estonia.

Other Irish athletes in action on Thursday also failed to progress.

Ben Kiely clocked 53.06 in his 400m hurdles semi-final to finish fifth while Marcus Lawler exited from the 200m after clocking 21.58 in his heat.

Kiely had produced a personal best of 52.39 in his heat on Wednesday.