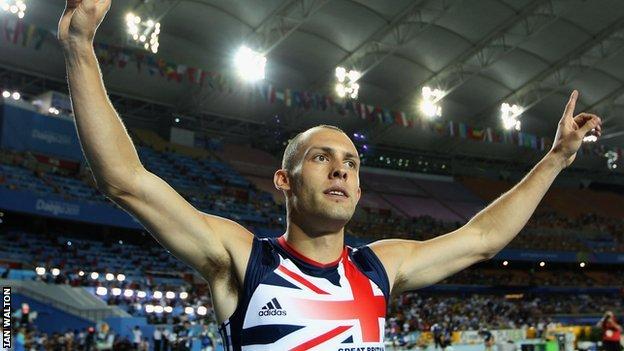 What we are looking for at the forthcoming London Grand Prix in Crystal Palace is how Britain's top Olympic medal contenders fare.

In particular, distance runner Mo Farah and 400m hurdles world champion Dai Greene, as it is likely to be their last race before the Games.

They both need a strong, confidence-boosting performance. Dai ran really well at the Diamond League meet in Paris the other night and got himself back on track after he revealed he had been struggling with injury.

Of course, we haven't seen Mo since he retained his title at the European Championships in Finland recently. He's been in Font Romeu (in the French Pyrenees) doing some high-altitude training.

Heptathlete Jess Ennis won't be competing and I looked at the triple jump entry list and saw Phillips Idowu's name. I've also been told he is competing, so hopefully the Crystal Palace crowd will see him. If he does compete, it will be a big competition for him as he's been away for a while injured.

The likes of Phillips, Dai and Mo, our big medal contenders, will really want to perform, especially if it's their last competition. They'll want it to be a good one.

But don't forget that across the weekend there are plenty of international athletes who are in the same boat and will want to perform well ahead of the games: the likes of American triple jump world champion Christian Taylor, the fastest woman over the 100m hurdles this year, Australian Sally Pearson, and Jamaican sprinter Asafa Powell.

After all the disagreements over selection for the British squad, there are probably a few athletes with a point to prove. But selections are done now and nothing is going to change in terms of who is in the team.

Any little head-to-heads between those who have and haven't been selected are irrelevant because they're on a different pathway now. Some might be thinking about revenge but revenge on your competitors isn't the way to do it.

One or two others may still be coming to terms with not competing at the Games and might find it difficult to pick themselves up and do well.

Whilst Dai looked fantastic in Paris, Puerto Rican rival Javier Culson, who will line up in Crystal Palace, is still a little way ahead of him but Dai is doing everything exactly right - hitting form just ahead of the Olympics.

"I was pleased Gareth won his appeal against omission for the 800m, it was the right decision. I'm sure he'll do pretty well. There are still some athletes saying 'well if you could overturn that decision then why not mine?' It's all about trying to understand why one decision was made and another wasn't. It's probably already been explained to the athletes but whether they're happy or not I don't know."

World 1500m silver medallist Hannah England is coming back after her time away with injury. She hasn't raced since a meet in Hengelo, Netherlands, where she was kicked by an opponent's running spikes. It will be important for her to get her confidence back. She's probably a little bit rusty as she hasn't raced much this year.

Lisa Dobriskey also ran brilliantly in Paris recently, bettering her season's best time by 10 seconds. But although she ran fast she still only came eighth.

There will be lots of athletes like Lisa trying to use the time left between now and the Games to improve their performances and Crystal Palace will indicate what pathway they're on.

After this weekend is out of the way, the British team will be heading to Portugal for their pre-Games training camp. Focus is then on not getting yourself fit, but getting yourself psychologically prepared to perform. You would hope that they're as fit as they can be by this point.

The danger in the last few weeks in the run-up to Olympics is that athletes over-train because mentally, for a long time, they've been thinking about getting themselves into the best shape they can. But it's about not doing too much and over-cooking it, and giving the best performance of their lives.