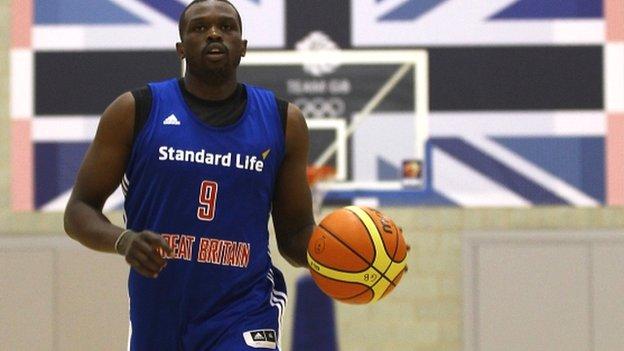 Luol Deng of the Chicago Bulls has been named in the British men's basketball squad for the Olympics.

But the omission of fellow NBA stars Ben Gordon and Byron Mullens was confirmed when the 12-man line-up was announced.

Deng is included after recovering from a hand ligament injury sustained in January.

"The next few weeks will fly by and I can't wait to step on the court with my team-mates at the Games," said Deng.

"We have all worked very hard for this opportunity and to have the final 12 named is exciting. We plan to make Britain very proud," added the 27-year-old.

Deng is the only member of the squad currently playing in the NBA. Forward Pops Mensah-Bonsu had five spells with six different clubs in the US before returning to Europe, where he now plays for Besiktas in Turkey.

Gordon was not considered for selection after he failed to report to the recent training camp in Houston by the deadline of 30 June and last week he was traded from the Detroit Pistons to the Charlotte Bobcats.

His absence is a blow to the squad which is relatively weak at guard.

Fellow Bobcat Byron Mullens recently dropped out of the provisional squad due to an injured toe.

Deng's hand injury meant that Great Britain basketball was forced into insuring the NBA All-Star for a sum in the region of £300,000.

GB returned to England on Sunday after losing all five matches at their training camp in the US, against Nigeria and twice each against Lithuania and Russia.

They play France and Spain away this weekend, before facing Portugal twice and the USA on home soil later in July.

Team GB need to finish in the top of four of their group to qualify for the knock-out stages of the Olympic competition. As well as Spain, ranked second in the world, Group B also contains Australia and China who are both in the top 10.

London 2012 will be the first time that Britain has been represented in men's basketball at the Olympic Games since 1948.