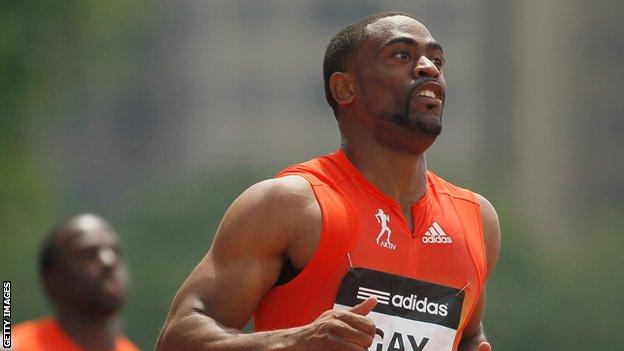 USA sprinter Tyson Gay believes any of the main contenders in the 100m can achieve gold at London 2012.

Gay ran 100m in 9.86 seconds at the US trials - the same as Usain Bolt did at the Jamaican trials, but 0.11 seconds behind Yohan Blake's trial time.

"I think it's fair to say everyone is on the same playing field right now," said Gay.

The 29-year-old will run against Games team-mate Justin Gatlin at Friday's Diamond League meeting in Paris.

2004 Olympic champion Gatlin, who missed the 2008 Games due to a doping ban, beat Gay at the US trials with a time of 9.80 seconds - the third best time in the world this year.

But the pair were separated by just 0.06 seconds, leading Gay to believe the 100m event could be very competitive at London 2012.

"Everyone is running almost the same time. Yohan has slightly separated himself from the rest of the field but besides that I think everyone is pretty even," he said.

Blake is also the current 100m world champion, winning at Daegu 2011 after Bolt was disqualified for a false start.

"Bolt took his losses but he's shown that he's been able to bounce back, just like he fought hard last year and he bounced back on the 200 so I think it's fair game," said Gay.

"I think Yohan is probably in some of the best shape of his life.

"For him to beat Usain Bolt and some of the other competitors in that race shows that he's serious about this."

Gay and Gatlin will be the headline pair of the 100m at the Diamond League meeting in France, with both expected to make the final at London 2012.

Six of the nine runners in Paris have clocked under 10.00 seconds this season, while only Calesio Newman of the United States has failed to run under the 10 second mark in his career.