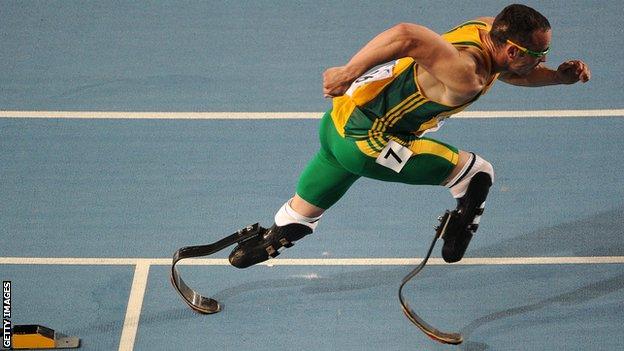 Oscar Pistorius is set to be the first double amputee runner at the Olympic Games after being picked by South Africa for the 400m at London 2012.

The 25-year-old has also been selected for the 4x400m relay squad.

"Today is truly one of the proudest days of my life," said Pistorius, who will also compete in the Paralympics.

"It is a real honour and I am so pleased that years of hard work, determination and sacrifice have all come together."

Pistorius appeared to have missed the chance of competing in the individual 400m after he narrowly failed to clock the 'A' standard time for a second time as required by South Africa's Sports Confederation and Olympic Committee (Sascoc).

But his inclusion in the relay team opened up his chance to also race in the individual event.

"As I have said many times before, we are not taking passengers to London," said Sascoc president Gideon Sam.

"Everyone has met selection criteria and are genuine Olympic Games material, either now or for 2016. I wish them all the best."

Pistorius ran in the individual 400m at the 2011 World Championships in South Korea but did not progress beyond the semi-finals.

He also ran in the relay but, after running in the heats, he was omitted from the final as South Africa went on to claim silver.

Pistorius is known as the 'Blade Runner' because of the prosthetic carbon fibre limbs he runs with. He was cleared to compete against able-bodied athletes in 2008 when an IAAF ruling that his blades gave him an unfair advantage was overturned by the Court of Arbitration for Sport (CAS).

"I have a phenomenal team behind me who have helped get me here and I, along with them, will now put everything we can into the final few weeks of preparations before the Olympic Games where I am aiming to race well, work well through the rounds, post good times and maybe even a personal best time on the biggest stage of them all," added Pistorius.

"I am also hugely excited to then be competing to defend my three Paralympic titles at the Paralympic Games.

"I believe we will see some amazing times posted and I am very much looking forward to what will be an incredible Olympics and Paralympics in London."